Jessie Malin: Rocker Gets By With A Little Help From His Friends 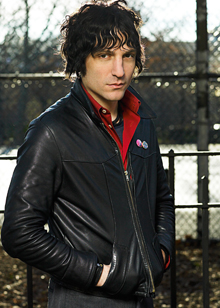 Cynics will tell you that there is no such thing as a sincere musical act or talent in the recording industry today. But clearly, they aren’t listening to Jesse Malin.

This singer-songwriter is perhaps one of the more genuine voices in the game. For him, it isn’t about the image or the awards; he’s on a mission to put out the best damn rock ’n’ roll he can.

That quest continues with his most recent release, Glitter in the Gutter. This record rocks harder than anything on iTunes or in your local music shop. It has an honest and unflinching sound that is best displayed on tracks like “Broken Radio” and “Prisoners of Paradise.”

Malin has crafted a work that stays true to his gritty East Coast roots, while soldiering forward with help from a few very important people. For his track “In the Modern World,” Malin enlisted the assistance of legendary rock god, Bruce Springsteen.

The two met several years back after the release of Malin’s debut solo LP, The Fine Art of Self Destruction. Shortly thereafter, Malin toured with the Academy Award-winning musician as his opening act.

Over the years, these rock dynamos kept in touch with each other. Then, one auspicious night in Massachusetts while backstage at the Seeger Sessions tour, Springsteen himself proposed the concept of working together.

“He asked what I was doing, and I told him that I was starting my record in a week. And he said, ‘I’d love to do something on it if it comes up.’”

From here, musical history was made. Malin journeyed to Los Angeles to record Glitter. Near completion, he sent a song to Springsteen along with the lyrics and a letter about his inspiration for the track and waited for a response.

In the end, Malin is grateful for having the opportunity to work with such a force within the industry.

He says, “He [Springsteen] is a really passionate guy; a real music lover. For someone that big and that famous for so many years, he’s just really grounded.”

These words carry extra weight considering their collaboration is for a tune that Malin penned about his late mother. She was a waitress by trade and a frustrated singer that never saw her dreams realized.

He says that it took him a minute or two to come to terms with the notion that she had been his inspiration in the first place: “I didn’t even know what it was about. When you write songs – sometimes you write them, and then you go, ‘Oh, shit!’ And then I realized it was about my mother.”

On past projects, Malin also worked with critically heralded talent, Ryan Adams, and has even received offers from the most unexpected places. “Me and Moby have sat down and thought about doing some stuff together,” he says.

But Malin refuses to completely abandon his rock roots for a high profile single. He stands firm as an artist who knows his place within his chosen field. That eagle-eye determination carries over into the musicians that are chosen to back him on stage.

For the tour in support of Glitter, Malin will take the stage alongside his stellar backing band that now consists of former Loud Lucy and Liz Phair bassist, Tommy Furar, who performs under the moniker, Tommy USA.

“He’s got a great heart,” says Malin of Furar. “He came down and auditioned for me and just ripped it.”

Malin hopes to continue recording more music and taking the stage at his favorite venues both at home and abroad. He will play dates at the Luna Lounge in Brooklyn, as well as the world-famous Troubadour in Los Angeles, one of his favorite venues.

But beyond all the excitement surrounding the success of Glitter in the Gutter, Malin looks ahead to the future of music with tons of wide-eyed optimism and expectation.

His one hope for his genre?

“That it stays real and honest and not too robotic.”

Glitter in the Gutter is currently available. Malin will perform June 20 at the Troubadour in West Hollywood. For more information, visit www.jessemalin.com.