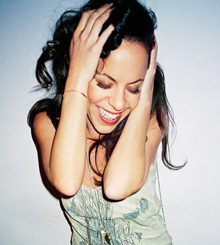 Bebel Gilberto doesn’t believe in making too many plans.

When it comes to writing music, she says, “It’s so natural it just comes to me. I cannot separate myself from music.”

Her latest album, Momento, is a lot like her personality: warm and intimate, open and philosophical. The sound is a seamless blend of bossa nova with occasional samba flair and rueful ballads reminiscent of Sade.

This, her third album displays maturity and a clear sense of her own style; sensual and elegant. Singing in Portuguese and English, she has the ability to make us swoon with nostalgia for life’s sweetest moments.

Asked how she does it, she replies: “I work with sincerity. I do what I feel in the moment.”

This philosophy, likely the namesake for the album, seems to be paying off. The album has won rave reviews from New York to Rio de Janeiro, where I spoke with her over the phone as she waited to see a doctor for a broken ankle, which has delayed her U.S. tour.

She talks with humor about the ordeal, “Imagine not being able to walk for 45 days!”

But the injury has allowed her to see friends and family and reconnect with her Brazilian roots. It has given her a break from a busy schedule recording and promoting Momento, which was produced in three different cities on three different continents: London, Rio and New York, where she currently makes her home.

Asked what she misses most about Brazil while living in New York, she pauses, “Ah, the beach and the smiles.”

She comments about the effect the city has had on her. “People called me ‘Gringa’ when I caffeame back for my Brazilian tour in 2005. They said ‘your so practical, everything is business, business,’” she laughs. “But I haven’t changed. I am still Brazilian.”

Gilberto is the daughter of legendary songwriter João Gilberto and singer Astrud Gilberto. Her uncle is the famous Brazilian writer, singer and political activist Chico Buarque. Coming from a family of such extraordinary talent you might think she has issues about living in their shadow.

“I’m not going to lie to you. I still have issues with it,” she remarks.

Gilberto cites them all as influences in her work. She even pays homage to her uncle with a gorgeous rendition of the Buarque classic, “Caçada.”

Incidentally, her family was not terribly enthusiastic when she first decided to pursue a music career at 17-years-old. “But you have to live your own life,” she assures.

As a young child, Gilberto didn’t expect to follow in her parents’ footsteps.

“All I wanted as a child was to have a normal family,” she shares. “A father coming home from work with his briefcase asking me about my homework. But I had a crazy man playing guitar the whole daylong, and my mother singing along side him. And now here I am, and it’s become my life, too.”

Lucky for us Gilberto seems to have accepted her fate gracefully. The album is a rocking sweet production, featuring the likes of modern bossa nova star Masa Shimizu on guitar and a hip-swinging version of Brazilian Girls’ “Bring Back the Love,” a song apparently written just for her.

There’s a startlingly sexy version of Cole Porter’s “Night and Day” that almost makes you blush. A rendition of the hit Kassin song “Tranquilo” is without a doubt the most fun, purely joyous song. It was recorded with Brazil’s Orquestra Imperial and has the capacity to suddenly draw one from one’s seat and into some absurd South American strut.

However, much of the album takes on a decidedly more pensive mood, subtle meditations on the nature of love.

“It’s funny,” she says with a laugh, “the album is all about love, love, love and yet, I wasn’t in love with anyone.” She explains further, “When I am working I don’t have time for all that relationship stuff. It’s too much distraction.”

The Momento album cover features Bebel looking down, almost shyly, an adorable smile on her face, which seems to capture that easy Brazilian charm. As the album continues to garner new fans and she launches her U.S. tour, I think we can safely say she won’t be suffering for lack of attention.