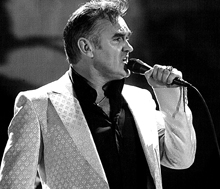 “It’s been 15 years since they allowed me into the Hollywood Bowl so thank you for sustaining your interest, or renewing your interest. Or if you were born in the last 15 years, as most of you were, I’m very grateful.”

Such humble and poised words from a legend who has touched so many people from different walks of life. Morrissey is a prime example of the saying: “some things get better with age.”

Moz was truly on top of his game Friday evening, playing to a sold-out Hollywood Bowl. I didn’t think that the setlist was going to be as varied, my opinion being that some of the best Morrissey songs occurred during his lead singer days with the Smiths in the ’80s. But Morrissey pulled out some great ones, including “The Queen Is Dead,” “How Soon is Now” and “Please, Please, Please, Let Me Get What I Want.” Great early-Morrissey songs like “Girlfriend in a Coma,” “Everyday is Like Sunday” had most of the Bowl swaying and singing in unison.

There’s something to be said for a singer whose career has spanned over 20 years and can still get the girls (and many boys) to rush the stage. One girl even clung to Morrissey’s body with her arms and legs. The singer just took it in stride … what else would you expect?

At the end of the blissful night, the last song was “There Is a Light That Never Goes Out,” and before he left the stage Morrissey stared out into the crowd and seemed to take it all in, just as the 18,000 fans had the pleasure of doing for the past two hours.