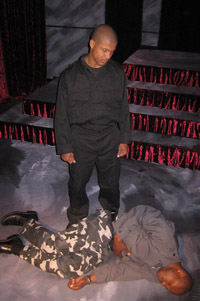 When an ambitious leader starts to take power away from the Senate to take more for himself, even his most devout followers must take action against him. It’s easy to deduce that Andrew McCarty’s production of Shakespeare’s play, “The Tragedie of Julius Caesar” is rife with contemporary relevance.

McCarty bills his production with the subtitle “an all African-American cast.” In 2007, the idea shouldn’t be novel or even noteworthy, yet, shame on America, it is.

Overlook the flowery iambic pentameter of “Julius Caesar,” delve into its core, and it’s easy to find contemporary ideas that could’ve been ripped from CNN’s “Headline News.” When Caesar defeats Pompey in a political battle, he begins a campaign to elevate himself to emperor, signaling the end of the Roman Republic. An inner cabal of Roman senators secretly plans to assassinate Caesar to hold onto their own power.

Cassius and Casca recruit Marcus Brutus as their scapegoat. Brutus, a protégé of Caesar’s, is known for his moral fortitude. When the senators seduce him to their cause, they believe they’ll be above reproach because Brutus is above scrutiny.

Moments later, Marc Antony eulogizes the slain leader and convinces the crowd that Brutus and his cohorts were cold-blooded killers. It’s almost humorous how quickly the crowd turns, manipulated by Antony’s effective oration. His famous speech incites a riot.

The power struggle erupts into war. Octavius, nephew of Caesar, Marc Antony and Lepidus plan to rule the Roman Empire as a triumvirate. Brutus and Cassius attempt to organize their own army to oppose them, but they’re caught up in their own treachery.

The power struggles play out on a small, but utilitarian stage. The actors are dashing in their modern regalia: suits and ties with a swath of brightly colored fabric draping over their shoulders.

Imoh Essien as Brutus is the most gifted performance of the production. His Brutus is played with nuance and subtlety. His charm captivates, and it’s easy to side with him, even after he kills Caesar and bathes in his blood.

Alfie Olson is a charismatic Antony, handsome and strong. He delivers the most familiar speech of the play, “Friends, Romans, Countrymen, lend me your ears…” When the speech ends, it’s easy to see how the Roman citizens would be incited to riot against Brutus and his allies.

Courtney Comer, appearing as a series of smaller characters, excels in her meager roles. “Julius Caesar” is a heavily male production, but Comer and fellow comely thespian Daniele Watts are a welcome balance to the masculine energy of the play.

Unfortunately, the play falters under McCarty’s direction. Though his idea is grand, his execution is poor.

The production is marred by a few of the performances. Some actors performing Shakespeare for the first time were not up to the daunting task.

Shakespeare is difficult, and it takes a certain level of expertise to perform. Several players overact, and their performances are unintentionally comical.

Some of the actors were assigned too many roles, and the multiple roles cause confusion among the audience. Justin Ruff, in an attempt to avoid confusion, tries to make his characters distinctive.

Though he’s a decent Ligarius, his Soothsayer is deliberately hammy. It’s easy to laugh at the hooded figure when he appears, but the role is meant to be menacing, not comedic.

The lesson of “The Tragedie of Julius Caesar” with its touted “all African-American cast” is that Shakespeare is best performed by Shakespearean-trained actors, regardless of their skin color.