A Place in the Sun: Photographs of Los Angeles by John Humble: Now-July 8 @ The Gettty 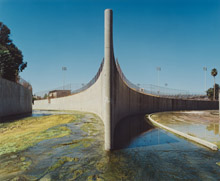 Of all the artists that have turned their voices to Los Angeles – Billy Joel’s “Say Goodbye to Hollywood,” Courtney Love’s “Sunset Strip,” the Rivieras’ “California Sun” – nothing, with the perhaps exception of the Red Hot Chili Pepper’s “Californication,” has captured what it’s like to live in this town as well as the Distiller’s punk ballad “City of Angels” with its refrain “They say/This is the city/The city of angels/All I see is dead wings.”

What would photographer John Humble, with his current exhibit A Place In The Sun at the Getty, make of the Distiller’s “It’s a ghost town rabid underworld/Dionysian night vitriolic twilight?” Though the majority of his pictures show the stark shadows that only appear in this land of light, he’d probably agree.

Seeing the L.A. river as a metaphor, in his words, of the “sociological archeology” of the city, while taking in eye-squinting daylight, these fetid waters belie a darker metropolis flowing beneath the reflected windows of the U.S. Bank building. They also provide a nice echo of P.H. Emerson’s work, also on exhibit, which document the rivers, lakes and marshes of England’s eastern shore.

In both, the fluidity of water is matched by the protean demographics living and working on, or in, its shore. This is not the Los Angeles on Venice Beach postcards, but it’s a Los Angeles we’ve driven by, over or quickly out of, many times before.

Humble’s photographs are signatures of Los Angeles as much as the Hollywood sign. Living in Los Angeles is living in A Place In The Sun, but this heat may signify something else … the Distillers: “It’s warmer in hell so down we go.”