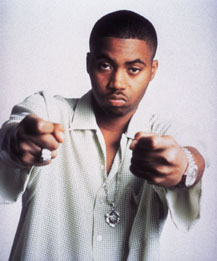 A double album, Street’s Disciple aims to detail the 31-year-old rapper’s emotional life in a style as sprawling as the most celebrated twin CDs of hip-hop history: Wu-Tang Clan’s Wu-Tang Forever, Biggie Smalls’ Life After Death and OutKast’s Speakerboxxx/The Love Below.

In many ways, he already is. The moment his first album, Illmatic, appeared 10 years ago, Nasir Jones became known as one of hip-hop’s best writers. In the time since, he has often been compared to – and battled with – Jay-Z for the title of "the hip-hop King of New York," though their music and careers differ radically.

To start with, Nas lacks Jay-Z’s massive pop clout, even though he has sold millions of albums in his own right. He also has a far more somber image. But Nas has found a unique role for himself in combining two seemingly dissimilar sensibilities within hip-hop.

No other rapper has brought together progressive politics with such thuggish aggression – a balance the rapper takes to a new level on Street’s Disciple. While most "positive" rappers come off as soft, Nas’ uplifting words haven’t tempered his resolutely hard image.

"I represent a certain life – the street," he explains. "Street is everything."

Nas concentrates on racial politics on the first section of Street’s Disciple. In the cut "American Way," he sarcastically takes on the Democrats and the Republicans, not to mention the U.S. population at large.

"I was inspired by the laziness [Americans] have," he says. "People don’t even know what they’re voting for, or why they’re voting."

In "Coon Picnic," he goes after black actors who dominate the sitcoms of UPN and the WB, and who, he says, "‘Yes, massah,’ on TV."

"[Those] guys are role models," Nas says. "TV is the greatest way to represent.’ And some of them ain’t" – by which he means these actors are not portraying blacks with dignity.

The album hardly sticks to social broadsides. Nas also raps about his father, jazz musician Olu Dara, his young daughter, Destiny, and his emotional growth, which is evident in his commitment to his wife, the rock-soul singer Kelis.

Nas has lighter moments in the music, too. For all the gravity of his sound and image, he often comes up with catchy riffs and even some club-ready tracks, like the new "You Know My Style," which re-creates Run DMC’s track "Jam Master Jay" in a way that pops.

Nas is more reverent when talking about his relationship with his dad. He feels he has special reason to celebrate their connection since so many rappers have no father figures.

"Bridging the Gap," one of the two tracks on which Nas and his dad collaborated on the CD, is a blues number that explores Dara’s musical roots. But it has a second function. In an era when hip-hop kids view blues as a corny style enjoyed mainly by middle-aged whites, the song helps reclaim its history.

But the question remains, can such pure explorations help Nas hold onto his fan base in an era when "crunk" party records dominate hip-hop?

Nas acts like he isn’t bothered on Street’s Disciple. He won’t market the album with what he disdainfully calls some "soda company cross promotion." That decision may be especially risky at a time when Vibe magazine has a cover line on its latest issue that reads, "East Coast Rap – Who Cares?"

"There’s still room for the emcee from New York," Nas says confidently. "That’s the beginning of the music. And that’s the end."

Street’s Disciple is currently available.
Article posted on 12/9/2004
This article has been viewed 2320 times.