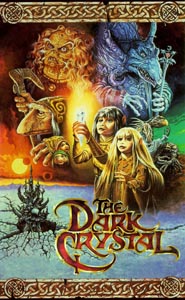 1982 was a good year for film. A lot of cool movies starring aliens, Muppets and things living in televisions made their big screen debuts including the most famous one of ’82, E.T., which became the highest grossing movie for almost 15 years. This weekend, some of the other movies from ’82 are playing at the Aero Theatre.

Jim Henson took a break from Kermit the Frog and Miss Piggy by directing a fantasy/sci-fi movie starring weird-looking Muppets called The Dark Crystal. It took an interesting look at good and evil but was a little scary for kids. It’s worth watching again just to understand what it was all about, because most of us didn’t get it when we were younger.

The Thing, one of John Carpenter’s (Christine, Escape From New York) classics, was a remake of a 1951 science-fiction classic. An Antarctic research station is taken over by an alien creature, which has the ability to imitate any animal or human it comes into contact with. The movie is a treatise in fear as the crew of the station can’t trust each other, as they cannot tell who is human and who is not; kind of like going to the DMV.

“They’re heere” was the phrase everyone remembered as the little girl touches the static on the TV screen in Poltergeist. Creepiness ran rampant in that movie where you never really even saw a villain.

A worthy double feature for many sci-fi fans is Tron and Star Trek II: The Wrath of Khan. It would be a kick to see ’82’s computer environment compared to now and the best of the Star Trek movies; also great to see Capt. Kirk kick some genetically engineered human ass.