The Stanley Cup Lands in SoCal! 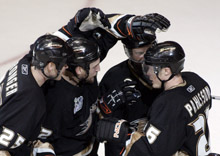 That chill you felt on June 6 was not from the ice at the Honda Center. It was hell getting a little colder.

For the first time in history, the National Hockey League’s Lord Stanley Cup will spend the next year on the beaches of Southern California, instead of the cold confines of places like Montreal, Edmonton or Pittsburgh.

After coming close to the title in the 2003 final, the Anaheim Ducks, once called “Mighty” when they first came into the NHL 14 years ago, couldn’t have been mightier as the team won its first title with a 4-1 series win against the Ottawa Senators.

Perhaps the one person the Ducks and fans all over the state should be thanking is none other “The Great One” Wayne Gretzky. When Gretzky was traded to the Los Angeles Kings from the Edmonton Oilers in 1988, it sent shockwaves throughout hockey and the West Coast. With his influence, three years later the San Jose Sharks were born followed by the Mighty Ducks.

As the Ducks and fans celebrated the team’s first championship, tears flowed like champagne as each player carried the cup around the ice. Even West Coast rivals San Jose, Los Angeles and Gretzky himself couldn’t help but root for the NHL’s newest champions.

“Even over in Phoenix we’re riding the Duck wave,” says Gretzky in Slam Sports Online.

“They’re our rival but it would be very positive to have a California team win the Stanley Cup. It would be a good thing for all of us,” Sharks president and CEO tells Slam Sports.

Quite a testimony to a team that was once laughed at around the league for being named after a kid’s movie and owned by the same people who owned Mickey Mouse.