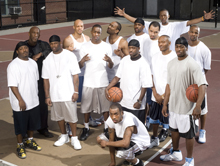 Any basketball fans disappointed that the NBA season is coming to a close? Are you a Lakers fan frustrated by Kobe Bryant and trade rumors? Well, help is on the way in the form of the Ball4Real Streetball Tour Presented by Mountain Dew.

Many of the stars from the AND 1 Mixtape Tour that was shown on ESPN have reunited to form their own tour that will make stops in 30 cities across the country. Fans can look forward to witnessing creative and jaw-dropping moves, star players facing off against each other and of course, high-flying, rim-rattling dunks that will bring the whole crowd to its feet.

But the new Ball4Real Streetball Tour offers more for the fans this time around.

When the Streetball Tour stars formed their own tour, they aimed to expand the experience for their fans while keeping it as affordable as possible. As part owners of Ball4Real, they are in the position to make decisions to do just that.

This year’s event features a free Block Party that will include the Ultimate Rides Challenge Car Show presented by the National Custom Car Association. The car show will feature all types of unique rides, and competitors will be able to win prizes and more important, showcase their creation to thousands of fans.

In addition, there will be food, interactive games, incline skating, a DJ and live musical performances.

On the basketball court, you’ll be sure to recognize familiar faces like Main Event, Spyda, ½ Man ½ Amazing and Mr. 720 (who earned that nickname because he did the first ever 720-degree dunk last season). There are also new players joining the tour including I’ll Be Right Back and Killa Kirby.

The streetball action will heat up when local streetballers compete against the stars of the tour for a chance to play in the main game and perhaps win a $100,000 Ball4Real Tour contract.

The halftime show even promises to entertain as fans and players will be treated to a performance of “Party Like a Rock Star” by the Shop Boyz.

Main Event, one of the legendary stars of the Streetball Tour, believes this tour caters more directly to the fans and especially the communities it will visit.

Although they will be playing in some of the biggest sporting arenas in the country, the players will also reach out to the “streets” where many of them got their start in order to give back. In every city they stop in on the tour, players will visit local YMCA’s, Boys and Girls Clubs and other outreach centers.

When they visit L.A., Main Event says, “Fans will be able to find me at Roscoe’s Chicken and Waffles, and the tour bus will ride through areas like Compton and Watts.”

In addition, local vendors from the community have been invited to participate in the Block Party, giving them the chance to promote awareness for their brand.

Main Event has used the formation of the Ball4Real Tour to further develop Streetball’s presence in the media. He has his own show On Demand called “Sportskool,” featuring interviews and clips with some of action sports hottest athletes (www.sportskool.com) and is the business representative for several of the Ball4Real Tour players.

“We are Streetball,” assures Main Event, adding, “Ball4Real Tour couldn’t be named better because everything about it is real. The players are a real group of guys, we’re going into the communities for real, the opportunities for fans are real and the streetballing is real.”

The Ball4Real Streetball Tour Presented by Mountain Dew will be held June 16 at the Home Depot Center in Carson. For more information, visit www.Ball4Real.com.