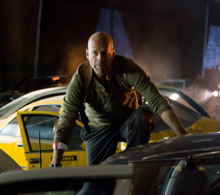 John McClane has taken on many roles: he’s a loving father, devoted law enforcer, cinematic icon; but nothing makes Bruce Willis cringe more than that dreadful word to which his onscreen alter-ego is often times associated.

“McClane is definitely not a superhero. He has no special powers or abilities. He’s a regular guy to whom anybody can relate,” says Willis, who reprises his role as the beleaguered detective in Live Free or Die Hard.

“While we’re always pushing the envelope to create great action sequences, I think it is McClane’s relatable aspects and sense of humor that really draws people in,” he assures.

In a summer dominated by web-slinging spiders and swashbuckling pirates, America’s taste for the fantastical has never been as ravenous. Yet the fourth installment of the popular action franchise is arguably the summer’s most anticipated blockbuster. After all, fans have had 12 long years to wait.

“Over the years, there’d been talk about a new Die Hard picture, but nothing really gelled for me until we came up with the angle of the two things most important to McClane,” Willis notes. “McClane loves his family and his country, above all, and he despises anyone who preys on people who cannot defend themselves. This was a fresh take on the character, but it always stayed true to his nature.”

Willis adds, “The stakes are higher now for McClane, but he’s still the regular guy unexpectedly confronted with some very irregular circumstances.”

The last installment of the action-franchise was 1995’s Die Hard with a Vengeance, which saw the return of the original film’s director, John McTiernan. The film was a worldwide success, grossing over a $100 million at the box office and cementing Willis’s status as a major Hollywood player – quite a high note to end on.

But much like director George Lucas, who completed his Star Wars franchise after 20 years of sitting idle, a decade after Die Hard with a Vengeance, the creative force behind John McClane also grew restless. That is, until he came across a screenplay by writer Mark Bomback.

“I’m a gambling man by nature, and I wanted to see if we could meet the challenge of creating a great story,” Willis admits. “I really wanted to live up to the first Die Hard.”

With the script written, Willis set about the difficult challenge of choosing a director. He wanted someone with the same bigger-is-better sensibility that is common of the previous films, but with just the right amount of subtlety to leave the audience emotionally satisfied. Willis found his man in Len Wiseman, director of the supernatural thrillers Underworld and Underworld: Evolution.

“You could tell somebody was definitely steering the ship because the world of the film never deviated,” Willis recalls of his initial viewing of Underworld: Evolution. “I thought Len could bring a lot to a new Die Hard film – and he did.”

With the director in tow, there was one crucial component yet to be added, the villain. In the Die Hard universe the enemy plays just as prominent a role as McClane himself. For actor Timothy Olyphant, the challenge of playing Gabriel was finding the right balance of intelligence and diabolical intent.

“Gabriel has an agenda with the government, and he’s now in a position to give the American public a strong reality check,” explains Olyphant, whose character designs a plan to topple the nation’s digital infrastructure.

“He is capable of certain methods that McClane is unable to foresee because they’re out of his realm of experience.”

In Live Free or Die Hard, McClane is tested by the ever-changing technological landscape. Twelve years have passed since his last theatrical outing, and his once decisive, think-on-your-feet mind is now futile.

Technology makes the decisions now. The world is in the midst of a digital revolution that continues to exceed the comprehension of the baby-boomer generation, and McClane is no different. He is, by all accounts, a victim of his age.

“The digital world has kind of left him by,” says Willis. “We didn’t want to suddenly make McClane computer-savvy and be able to stop Gabriel and hack into satellites. McClane wouldn’t know how to do that. So we have some fun putting him in situations he doesn’t understand and pitting him against a bad guy using tools and methods McClane’s completely unfamiliar with.”

To foil Gabriel’s plot, McClane will require the assistance of the computer-savvy Matt Farrell, played by Justin Long, and the Internet-hacker-extraordinaire known simply as Warlock, played by filmmaker Kevin Smith.

The role as an Internet virtuoso is a natural one for the moonlighting actor, who is rumored to spend most of his day chatting with fans of his Jay and Silent Bob movies on the social networking Web site, MySpace.com.

“There are days where I’ll spend all day online then go to bed,” he confesses.

Long, star of such films as Accepted and Galaxy Quest, notes how his character plays a far different role than McClane’s previous partners.

“He’s not a cop or a streetwise guy,” Long explains. “Matt’s a man of technology, while McClane’s a man of action. A lot of fun comes from their interaction.”

A character who makes for a different type of pairing is McClane’s daughter, Lucy, played by Mary Elizabeth Winstead.

Now a college student, Lucy is at odds with her father for his absence throughout her childhood. When Gabriel threatens her life, however, the emotional stakes are raised.

“She’s definitely her father’s daughter,” says Winstead. “She’s feisty with a lot of the McClane spirit and toughness.”

If there’s one constant in each Die Hard film, it’s the grandiose special effects. With a hefty budget to work from, Live Free or Die Hard makes ample use of Computer Generated Imagery, or CGI, to create a unique and visceral world where airborne cop cars sail like missiles into helicopters and Harrier jets hover inches above a crowded freeway. Just another day’s work in Hollywood.

“We always envisioned Live Free or Die Hard as a straight-ahead action ride, that was true to the tone and character of the original but updated for today,” says Willis. “I can tell you we’ve more than met that goal.”

To achieve these feats both the director and star worked day and night to assure their artistic vision was translated on to the screen.

“The film was the most draining of the Die Hard films, both physically and mentally,” says Willis. “I will have been working on this film for an entire year by the time it opens. But it’s definitely the most rewarding from an artistic standpoint.”

Aside from the big budget special effects, humor also plays a prominent role in each Die Hard film. Known for his biting jabs and endless wisecracks, McClane is never too far from offsetting tragedy with his own brand of irreverent comedy.

Take for instance a scene in Live Free or Die Hard where McClane, after driving his sedan into a manned helicopter, narrowly escapes the impending flames only to be broached by his physically-limited cohort Matt: “You just killed a helicopter,” a stunned Matt observes.

“I ran out of bullets,” McClane quips.

Answered in classic McClane style, the scene adds a lighthearted touch to a character whose quirks we’ve grown all too familiar with.

“I’m very protective of McClane and aware that there’s a fine line between poking fun at the character and laughing at him,” Willis says. “We always want audiences to relate to him and one way to do that is through laughter.”

It’s safe to assume that laughter is one of several reasons audiences relate to McClane. Who can forget how he had all of America repeating his signature phrase, “Yippee Ki Yay,” after the mega-success of Die Hard?

Willis is also cautious of McClane’s dramatic lines and refuses to keep a tight lip if he disagrees with the script.

“Having played the character previously and being so closely identified with McClane, Bruce brought a critical level of experience to the project,” says screenwriter Bomback.

“In a way, McClane is another version of Bruce,” he continues. “During our script meetings Bruce would say, ‘I don’t think McClane would say that; he might say this.’ And then we’d suddenly realize that Bruce’s idea was more appropriate to the character.”

If John McClane is the alter ego of Bruce Willis, the two share an endearing “regular guy” sensibility that makes the onscreen transformation virtually seamless. He is the next-door neighbor, the super-market clerk, the apartment painter and the highway patrolman.

And since he is that old friend we feel obligated to greet each time we cross paths, it’s only natural we say hello one more time.