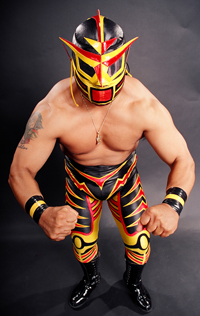 In a world full of war, conflict and strife, what do we need a little more of?

Sex and violence, according to Rita D’Albert.

“It’s the most PG version, so it’s almost tongue-in-cheek when we say sex and violence,” D’Albert confesses. And, as co-founder and dancer in Lucha VaVoom, a Mexican wrestling spectacle mixed with burlesque, she probably knows what she’s talking about.

“The show is pure entertainment where you can put all of your cares aside,” D’Albert says. “I think that’s the best thing we can do for anybody – let them put their problems aside for three hours.”

The show is a slightly modified version of traditional Mexican wrestling, Lucha Libre, a no-holds-barred physical contest that puts the wrestlers’ athletic and acrobatic prowess on trial. Lucha Libre literally means “free wrestling,” with only one important rule: under no circumstances can you remove your opponent’s mask.

Masks in Lucha Libre are critical to the character that each wrestler embodies, and to remove your opponent’s mask is to reveal his identity to the world. It’s also grounds for immediate disqualification.

Lucha VaVoom sticks to these roots, but throws in a little something extra.

“Matches are a little long, and we’re working with people who are used to MTV,” D’Albert relays. “We incorporated dancers, so if we don’t get them with violence, we’ll get them with sex.”

Rather than have three matches as is normal in Mexican bouts, D’Albert and her co-founder Liz Fairbairn pared it down to one and added in the burlesque aspect. The shows are commentated by a pair of comedians who keep the crowd in stitches as they watch the masked wrestlers tear into each other on the mat.

Between the fighting, the comedy and the outrageous performances put on by very talented dancers, Lucha VaVoom is a visual orgasm appealing to what is most basic in us.

“On the night of our first show, I looked out into the audience and realized that we’d tapped into something amazing,” D’Albert shares.

The inspiration for the show came from Fairbairn, when she developed an obsession for Lucha Libre while dating a wrestler. After dragging a few of her friends, including D’Albert, down to watch shows in Tijuana, the question became how to bring Lucha Libre to a wider American audience.

The result was Lucha VaVoom.

“We take all of the best,” D’Albert explains. “We’re not bastardizing it.”

The first show was in 2003, and the company does, on average, three shows a year as much to tantalize their audience as keep the shows fresh and exciting. Even with performances three nights every four months, Lucha VaVoom has developed quite the cult following.

“We have some diehards that go to every show,” D’Albert says. “It’s totally word-of-mouth. This is the first year we’ve done any advertising.”

They have four months to prepare each show, and it’s usually just enough time. Fairbairn handles all of the costuming for the production, which usually follows a theme that the dancers then choreograph their performances to.

This time around for the show that begins its run on the 26th, the theme is “quinceañera” in honor of the 15th show in their five-year career.

Things are a little hectic this time because, due to circumstances beyond their control, both the normal director and lighting person are MIA. According to D’Albert, some of the choreography is still coming together, but it just adds another level of excitement for her.

“You can be crushed or just make something new,” she says. “We’re trying to make lemonade.”

The show has its home base in Los Angeles, and in the downtime between performances, D’Albert wants to spend her time on the road bringing the spectacle to new cities all over the world. Lucha VaVoom has already graced stages in Toronto, Chicago, Amsterdam and Las Vegas, and D’Albert is pressing for a regularly timed engagement in Sin City.

Even so, D’Albert says, Lucha VaVoom is a true Angelino.

“Having lived here and been to a lot of places, this show really could only have happened in L.A. With all of the influences that are around us (comedy, Mexican culture) it just came together,” D’Albert says. “It couldn’t have happened anywhere else.”