Téa Leoni: Delightfully Charms in You Kill Me 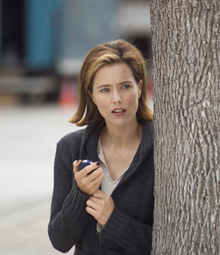 “I’m gonna use your toilet” is the not the first thing I expected to hear come out of Téa Leoni’s mouth.

“Don’t try and listen, I’m shooting for the side of the bowl” was not the second I had anticipated hearing, either.

Her delightfully callous charm and overwhelmingly shining energy far surpass expectations gathered from her screen persona. Leoni has the wonderful capacity most successful actors married to other actors don’t: that ability not to be typecast and consistently maintain a sense of unobnoxious quirkiness even in the most serious and complicated roles.

Leoni proves herself once again in You Kill Me, a meditative tale of an alcoholic mobster that retains a sense of darkened humor only director John Dahl can bring you.

Polish mob hit man Frank (Sir Ben Kingsley) has a problem, and it’s not his occupation as a professional killer. His alcoholism is interfering with his work, and he’s forced to move from his reserved hometown of Buffalo, N.Y., to the culturally diverse epicenter of San Francisco, Calif.

Frank must get a day job in San Francisco, while attending AA meetings and cleaning up his act. With a sponsor, Tom, played by Luke Wilson, and love interest Laurel (Leoni), who has her own multiple layers of a mysterious and damaged emotional past, a humorous trio is formed brimming with no-nonsense compassion and the epitome of open arms for outsiders.

Laurel’s conspicuous lack of backstory in the film was not merely an oversight in editing, but rather a pointed omission in the original script. The robust sense of confidence the script maintains in its overarching narrative and greater themes of unexpected empathy is part of what attracted Leoni to the film in the first place.

Allowed the freedom to construct Laurel’s turbulent past herself, she reveals a two-pronged attack on character attainability.

“I always start with the hair and undergarments, then I go deeper,” she reveals.

Basic manifest and latent demonstrations of our personalities, Leoni emphasizes the dramatic implications in the establishment of Laurel’s hairstyle and underwear. That said, don’t tell, but Laurel is in fact a Hanes girl.

Leoni brings an intriguing likeability to Laurel, an accomplishment that can be easily overlooked. Whenever a woman has a tumultuous history or an emotionally damaged past, those imperfections are often categorized into one broad behavioral attribute that can be described as bitchiness. Within Laurel and Frank’s first meeting, however, her brash sarcasm and honesty is matched with Frank’s on a playing field of real, flawed, human concern.

Bred in a world reliant upon secrecy and façade, Frank is squeamish in the midst of the AA community’s insistence on sharing, supporting, loving and worst of all; clapping. Anything goes at an AA meeting, as Frank shockingly and humorously proves when he admits to his fellow alcoholics he kills people for a living.

Proceeding to explain matter-of-factly how his occupation as a professional hit man necessitates his utter focus and sobriety, he also declares that he must quickly work to recover so that he can return to his family and begin working again. The fleeting sense of shock at Frank’s admission is soon met by resounding clapping, contributing to the film’s themes of building character strength through embracing one’s flaws.

Writers Christopher Markus and Stephen McFeely began the script 10 years ago after attending an actual AA meeting with a recovering family member. The complete absence of societal standards and the life-threatening importance of beating addiction opened the door to truly test these observations.

Dahl uses these extreme circumstances to foreground the delightful uniqueness of relationships born from unconventionality. The dark humor of Frank’s close-knit mob family, his day job at a funeral home, Laurel’s unknown past tribulations, all overran with government bribery and Frank’s sponsor Tom’s quaint occupation as a toll booth worker, You Kill Me will leave you with a surprising sense of hopefulness.

You Kill Me releases in theaters June 22.