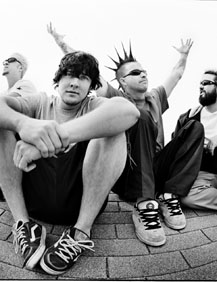 As many bands jump on the pop punk and ’80s rock bandwagon, there is a microscopic niche of musicians who aren’t afraid to blend musical borders.

Authority Zero is one of those acts. The Mesa, Ariz., group – made up of guitarist/vocalist Bill Marcks, vocalist Jason DeVore, drummer Jim Wilcox and bassist Jeremy Wood – has been blasting out music that fuses together rock, ska, punk and hardcore punk for over five years. The band has built a loyal following through heavy touring and intense recording while having a ton of fun doing it.

The band has been touring constantly since releasing their sophomore album, Andiamó. Packed full of high-energy punk and ferociously poignant lyrics shouting for changes in one’s life and the world, the album shows that Authority Zero knows how to deliver melody with a message.

The album’s first single, "Revolution," urges fans to make a personal revolution with its pounding lyrics, "You want a revolution? You have to make a difference on your own."

Guitar player and vocalist Bill Marcks explains the song’s concept. "The song is about [an idea] that if you want to make a change in your life, and if there’s something you have to do about it, you can’t wait around for someone to do it for you.

If you want a revolution, someone has to take that first step, whether it’s a political stance or in your own life. If you want to make a change, you can’t expect someone to do it for you," explains an impassioned Marcks.

"There are a lot of bands on [the album] that I have grown up respecting. It’s cool to see them on the same compilation striving for the same thing," Marcks explains.

Along with being on the political compilation album, Authority Zero snagged the opening spot for the Punk Voter tour with NOFX and Alkaline Trio, performing on college campuses across the country.

"That was a very fun tour and another dream comes true. NOFX is another band that we’ve looked up to since we were kids," Marcks says.

When the band’s members return home from life on the road, they often check right back into the Arizona music scene.

"Every time we go back, it seems that [the music scene] is still striving," says vocalist Jason DeVore. "Some bands drop off, some bands have new members, [but] there’re new bands coming up all the time. It’s kind of cool because this band Element had a [band member] who came up to me before a show and said we were a big influence on them."