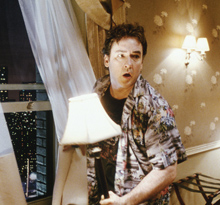 Once upon a time, a young actor by the name of John Cusack made a Peter Gabriel song legendary just by holding up a ghetto blaster in the film, Say Anything. Now, 20 years later, he’s associated with another project that has an equally relevant musical tie-in.

“We’ve Only Just Begun” by the Carpenters has for years been on the short list of songs reminiscent of the seventh layer of hell. How apropos that it has found its rightful home in a movie about that very subject.

The acerbic and spooky new film, 1408, incorporates this tune into the body of an incredibly thrilling story about what can go wrong when we are left to deal with our inner demons.

Author Mike Enslin (Cusack), has carved out a mediocre career as a paranormal writer. Trouble is, he doesn't believe in ghosts and goblins.

When a dare (in the form of a mysterious postcard) arrives prompting him to stay away from an allegedly haunted hotel and the room in question, he fights tooth and nail to investigate it.

This results in his horrific stint at the Dolphin Hotel – an establishment with a rather tarnished history and a motley crew of slightly questionable employees. Among them is Mr. Olin, played by Samuel L. Jackson. Olin does his best to assuage Enslin with any other accommodations in the hotel but that one.

Alas, it’s no use. From this moment on, the movie takes off on an hour-long roller coaster ride.

But instead of playing up the traditional violence of other horror films, 1408 preys upon the innermost fears of everyone who dares to step across its threshold. Not since The Blair Witch Project (1999) has one film been so successful at weaseling its way into the audience’s collective sense of foreboding.

“I hope that viewers will make Mike Enslin’s journey their own journey,” shares 1408’s director, Mikael Håfström (Derailed). “I want them to wonder, ‘What would happen to me in 1408?’”

That is the magic question; the one that will make or break this film. Each new terror that befalls Enslin begs the viewer to not only soul-search his or her deepest fears, but to suffer through the craziness that this writer goes through.

Enslin appears to be a pretty evenly keeled fellow. When his demons begin to surface, they are wildly intense, and it’s a guilty pleasure to watch them manifest.

“I thought that one of the fun things about this piece was that King had written this very terrific and cynical character that was basically daring God or the devils to show themselves,” says Cusack.

This includes indoor natural disasters and ghosts of strangers and of his recently deceased daughter, Grace (Jasmine Jessica Anthony).

“When you saw that little girl walk over that broken glass, that wasn’t a fun day on the set,” he relays.

And it’s just as creepy for viewers. The film’s casting directors worked wonders finding an adorable, wide-eyed sweetheart in Anthony to torture the hell out of the Enslin character. Håfström then wisely plays up her presence until the very end of the film.

In 1408, King’s short story becomes a masterful screenplay penned by Matt Greenberg as well as the duo of Scott Alexander and Larry Karaszewski. The latter are responsible for the light-hearted, humorous moments that sandwich all of the drama and frightening stuff (they wrote Agent Cody Banks and the Problem Child franchise).

So what would really make these stars lose it if they were each trapped in 1408?

For Mary McCormack, who plays Enslin’s estranged wife in the movie, it’s unmistakable.

Cusack’s greatest fear in life is being responsible for someone else’s death. Although he admits, “On a shallow level, [it’s] rats.”

Jackson jokes that not working is what terrifies him most.

Who knows if that’s the underlying reason why he joined this terrific cast of seasoned professionals. Of course, for Cusack, his attraction to 1408 was simple.

“I just thought it would be cool to be on a [movie] poster with Sam Jackson!”