Tiger Army: Brings Psychobilly to Rock's Forefront with a Roar 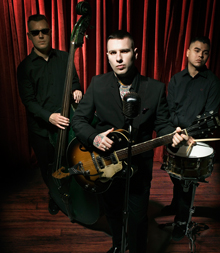 There are some artists that take seconds to reach fame and fortune, through connections or manufacture, while other artists grind it out (the way it should be!), infusing every note they make with the passion and perseverance found within their journey. The latter can be said for the nearly 10-year trek taken by Tiger Army.

Releasing its new album Music From Regions Beyond, and just poised to co-headline the Vans Warped Tour this summer, Tiger Army can be considered somewhat of a transitional band: changing members and changing tone. The new release is a decided attempt to bring the group’s brand of psychobilly rock ’n’ roll to a wider audience.

Lead singer Nick 13 has been seemingly gruff in recent interviews, but remains a consummate musician. As quoted in an interview in Nerve Magazine, he says, “I’m sure a fair number of people will hate it and be deeply disturbed by it. But I’ve always written for myself, and if people like it, great, and if they don’t that’s fine as well.”

Tiger Army has always taken musical risks to diversify its sound and the audience’s experience, and its new release is no exception. It’s arguable that audiences will leave screaming in anger from the venue, but, just as Metallica proved 10 years ago, all bands must evolve, and Tiger Army is no exception.

With more inclusion of upright bass, steel guitars and songs in Spanish (Track 9: “Hechizo de Amor”), Tiger Army still holds its line as willing to take many risks in the evolution of its sound, yet not ignoring that this is the music business, and the sound must homogenize to be saleable to a larger audience.

One thing that cannot be ignored is that this version of Tiger Army does seem to have one ghost member in AFI. The listener cannot ignore the feeling that this new Army has the sound and feel of a rockabilly AFI, with vocals, sounds, production and overall feel of an AFI-lite.

It’s no secret that there is more than just a fleeting influence by AFI in this band, from the use of that band’s producer Jerry Finn to the recording of the new album, to Nick 13 himself contributing backing vocals to AFI’s Decemberunderground, as well as AFI lending them a drummer named Adam Carson, way back in 1996.

Some will say this may be what brings down Tiger Army, while others may cite it as reasons why it succeeds. Only time will tell the tale.

Nevertheless, most music listeners probably are not familiar with the tough, tattooed, retro look, feel and sound of psychobilly. Past Warped Tours had banished bands like Horrorpops to the smaller stages, or had them play the main stages right at show opening to a trickle-in audience.

Tiger Army does succeed in continuing its legacy as torch-bearer in this genre of music, while holding the credibility to bring forth this blend of music to a new, peripheral audience who may be looking for something other than the banality of emo or pop punk.

These audiences will definitely connect with the refined Tiger Army sound and will enjoy its energetic stage show and alternative look and feel. There are no top 40 chart-breakers on the new album, but that’s not what Tiger Army wants to be. A rarity in rock music of any sort, Tiger Army strives to truly be about the music, taking risks and experimenting with new sounds, instruments, arrangements and influences.

Though it’s arguable that this new work lacks the danger and edge of previous releases, there’s a strong punk rock undertone found in Tiger Army’s foundation, and that counter-culture mentality should fuel the band’s fire for a long time to come.

Tiger Army will never die, and maybe that’s just what’s needed to break up the musical monotony in today’s marketplace.

But Nick 13 will piss on Jerry Falwell’s grave if given the chance. That’s the way they roll.

Music From Regions Beyond is currently available. Tiger Army will perform on Vans Warped Tour June 29 in Pomona, June 30 in Ventura and Aug. 25 in Carson. For more information, visit www.tigerarmy.com.