Mark Broussard: S.O.S.: Save Our Soul 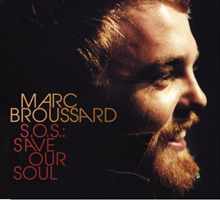 Marc Broussard can really sing. He more than holds his own delivering classics from legends like Al Green, Donnie Hathaway, Otis Redding, Marvin Gaye, Bobby Womack and Stevie Wonder. And did I mention he’s white?

He’s been hailed the new crown prince of blue-eyed soul music. Yet unlike one of his contemporaries, Robin Thicke, this crooner’s vocals are grittier, influenced more by his Louisiana roots than today’s slicker R&B tunes.

Album highlights include the single, Al Green’s “Love And Happiness,” Donnie Hathaway’s “I Love You More Than You’ll Ever Know,” Otis Redding’s “I’ve Been Loving You Too Long,” Stevie Wonder’s “You Met Your Match” and Bobby Womack’s “Harry Hippie.”

His one original composition, “Come in From the Cold,” is equally as heartfelt. There’s not one losing cut on the entire album.

Broussard has an emotionally charged voice crying to be heard. You can feel his joy, pain and every emotion in between.