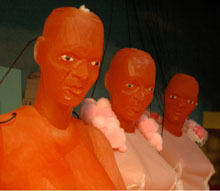 I don’t have much experience with puppets. The last puppet-led performance I saw was Muppet Treasure Island, so when I heard the phrase “experimental puppet show,” I didn’t know what to expect.

The Manual Archives is small, squishing in the 18 people who’d come to see the show that was described as a “creation myth for Los Angeles.” The phrase had piqued my interest – anybody who could explain this city to me deserved a medal. At the front of the venue sat two musicians and the narrator of the piece, directly in front of a small curtained hole in the wall that I supposed was the “stage.”

I was vaguely mystified by both the set up and the premise. Unfortunately, by the time the performance had ended, I was still somewhat in the dark.

“Lead Feet” is the story of three identical sisters trying to come to terms with their individual identities. They know that one of them has to be the “original” sister and the other two are replicants, and they spend much of their time wondering who is who. This question of the importance of originality runs through the play.

The three sisters travel to Los Angeles, and odd things begin to happen. Buildings begin to replicate out of control and a karaoke fad sweeps the city (possibly the more disturbing of the two).

Realizing that the rampant replication has something to do with them, the sisters head out in separate directions only to find that they can’t live apart. They reunite in Los Angeles despite the consequences.

The show provides a cute idea as to how Los Angeles became the sprawling urban landscape that it is, and was rather positive about it. The puppet-world seems to have a much better opinion of urban sprawl than most of the people I’ve spoken to.

Essentially, “Lead Feet” is a great concept with poor execution. Salient to the production is the question of originality and the idea of finding yourself in someone else.

At one point in the piece, the citizens of Los Angeles begin to realize that they too are replicating as they begin seeing themselves in the faces of others, which is a nice thought concerning man’s commonality if you want to take it that way.

Though it has good thought behind it, the use of the puppets made the production something of an effort to watch. Occasionally when the puppets themselves couldn’t act out the emotion that they needed, the puppet mistresses would act for them, totally visible to the audience as they moved the puppets into position. It sort of made one wonder why this wasn’t just acted out by people in the first place.

On the other hand, the creator, Susan Simpson took the production from a short story that she wrote which I would very much like to read, as I feel that it would be a more appropriate way to convey the ideas of the piece.

There were parts of the performance that were made difficult to understand, both by the medium and by the dialogue (or utter lack thereof). For instance, after the death of their grandmother, the sisters are affixed with antlers and take turns flying around the stage.

No verbal explanation is given for this admittedly odd behavior, begging the question of why the playwright would choose to include the scene. AP English taught me that you can interpret art however you want, with the slight caveat that if you’re pulling reasoning out of thin air, the artist didn’t convey what they were hoping to.

One very interesting part of the performance was the inclusion of folk songs. As a version of a Los Angeles folk tale, the inclusion of the live instrumentation and fitting themes of the songs was a thoughtful inclusion to the piece.

Though the performance was only 80 minutes long, the artistically stilted dialogue and awkward use of silence kept it stalled. The real hero of the night was the small child in the row in front of me who fidgeted but did not complain.