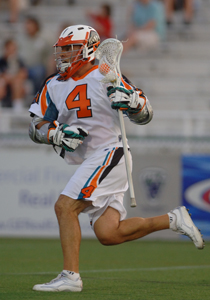 Labeled “The Fastest Game on Two Feet,” lacrosse is one of America’s oldest sports, combining various elements of soccer and hockey. It has a huge following on the collegiate and professional levels on the East Coast.

But for sports fans on the West Coast and in Los Angeles, many people are being exposed to it for the very first time. Lacrosse is hoping to gain a following and fan base here with its addition of four expansion teams.

The 6-year-old professional Major League Lacrosse league added the Los Angeles Riptide last season. (The other three teams are the San Francisco Dragons, Chicago Machine and Denver Outlaws). Coming off of a 6-6 record last season, the Riptide is 2-2 after an 18-15 loss against the Denver Outlaws on June 9.

Tucker went on to play professionally, leading the Philadelphia Wings to the National Lacrosse League indoor title and earning Most Valuable Player honors. He was also an assistant coach for the women’s lacrosse team at Johns Hopkins.

Tucker says he believes lacrosse can be successful on the West Coast, and that the Riptide can add to the long-standing legacy of championship teams in the city.

“I think what will appeal to the people in L.A. is that the players are a lot like them,” says Tucker. “They are everyday people, and unlike a lot of other professional sports, the players are very assessable to the fans.

Riptide player Michael Watson, an attackman who hails from the University of Virginia, is in his fifth year in the league. Watson led the Riptide last season with 40 points and tied for the team lead with 27 goals.

Watson assures that there’s no reason for lacrosse not to be successful in L.A. with so many kids leaving other sports to play in youth lacrosse leagues.

“Nationwide, fewer kids are playing sports like baseball and basketball and are playing lacrosse,” says Watson. “Lacrosse is a lot more appealing because it’s a very exciting, athletic, full-contact, high-scoring sport. We had nearly 6,000 fans at our home opener this year, and I think that as we continue to grow and win, those numbers will increase.”

Major League Lacrosse is proving that it wants to be taken seriously. Besides expanding to major markets such as L.A., it signed a 10-year deal with ESPN to have its games televised.

The league is also scheduled to expand further on the West Coast in 2008 with San Diego, Dallas, Houston, Portland, Salt Lake City, Seattle, Columbus and St. Louis vying for franchises.

The Riptide will play its second home game versus Chicago on June 23 at The Home Depot Center in Carson. For more information, visit www.lariptide.com.