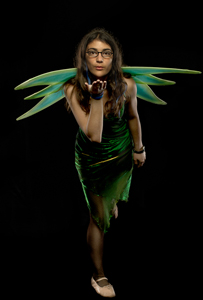 Make-believe, that most transient and transpersonal of intoxications, culturally relegated to youth yet embedded in us all as a private infantilism, is the fantasy domain where we try out alternative identities, scenarios, events and experiences. Such benign wish fulfillments have surely existed in some form for as long as we’ve been blessed with imagination and cursed with desire.

Here narrative is stripped bare; characters so deeply enrapt in their own hermetic plots that they are bereft of context float as virtual signs given uneasy flesh and blood. They elicit that awestruck feeling one inevitably gets when faced with the oddity of nonconformity, a breathtaking “is that for real?” quality not without some unintended whimsy.

Lest the uninitiated dismiss Dorfman’s cornucopia of curiosities as some deranged Halloween party gone awry, it’s perhaps fruitful to consider the genesis and evolution of this highly articulated and aestheticized lifestyle. As long as fans of the socially debased medium of science fiction have gathered to share their passion with like-minded fiends, they have always indulged, in some degree, in role-playing and costumes.

At first it seems that it is the oddity of the subjects that is so disconcerting in these pictures, but collectively the hardest thing to negotiate here is the frisson between the apparent [the subjects look strange] and the intrinsic [beneath the prosthetics, makeup and garb they’re prosaically normal]. Fandom is simply the force by which personal disconnect attains interconnectivity, a community of private fantasy, a safety valve for obsessive tendencies that channels our most unhealthy attachments toward worthy pursuits.

Try to forget how weird it is, for it is positive, liberating and surprisingly free of orthodoxy.

(Elena Dorfman’s) documentary methodology engages these issues just by the way it compels us to make sense of the mystery.