License to Wed: Mandy Moore and John Krasinski's Bumpy Ride to the Altar 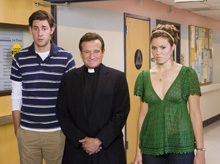 Mandy Moore has been called the Sandra Dee of her generation: a beautiful girl next door whose wholesome charm and sunny smile have made her a star. John Krasinski is quickly solidifying himself as a highly sought-after romantic lead. Not bad for a New England native whose early career has been rooted in comedic cameos and stints on network TV.

Together, these 20-somethings light up the big screen in the new summer release, License to Wed. They play Ben and Sadie, a lovable young couple seeking to take their union to the next level.

When Sadie decides that her nuptials must take place in the beloved family church, Ben is only too happy to give his bride-to-be what she wants. Unfortunately for them, that kindness comes with one small condition. In order to wed there, they must pass a marital boot camp run by Sadie’s minister, Reverend Frank (played to the hilt by Robin Williams).

License producer Nick Osborne admits, “There’s been a recent surge in popularity of marriage prep classes, which teach couples how to communicate fairly, balance finances, keep the romance alive, etc. In our movie, Reverend Frank teaches the course, and he’s the kind of guy who’ll find the hot buttons in your relationship and push them until they fall off. It’s his attempt at curbing divorce by weeding out the bad couples.”

It’s this eerie sign of the times that sets the tone for this wacky film. All hell breaks loose as Ben starts to unravel and buckle under the intense pressures of the course.

Remember this? “First comes love/then comes marriage/then comes the baby in the baby carriage.” Well, audiences will be singing a different tune when they see Ben and Sadie’s offspring.

OK, so they don’t actually have kids of their own in the film. In one of the first tests of the couple’s commitment to each other, Reverend Frank simply provides the characters with animatronic twin babies that look a lot like classic film star, James Cagney. The dolls steal the show and lend some pretty nice gross-out humor in the process.

“Handling the babies was pretty difficult,” Moore confesses. “They were also really heavy and smelled funny. I can’t even begin to describe it. It was putrid.”

Adding a comedic boost to the production is this year’s Mini Me; a choirboy played by Josh Flitter. This character is equal parts amusing and freaky (think: Baby Herman from Who Framed Roger Rabbit).

His job is to be the enforcer. He carries out each of Reverend Frank’s wild and zany commands, including breaking and entering into Ben and Sadie’s Chicago apartment, bugging the lamp on their nightstand, oh, and using a remote control to program the ugly robot kids.

“Choir Boy is enrolled in Reverend Frank’s ‘Ministers of Tomorrow’ program, and his life goal is to become the greatest reverend ever when he grows up,” says Flitter. “He wholeheartedly believes in the prep course that Reverend Frank created and is the one who gets things done behind the scenes.”

To date, Flitter is building a nice career for himself in similar roles. In 2006, he was the smart-ass computer hacker, Stewart, in Big Momma’s House 2 and also had a bit part in Michel Gondry’s Eternal Sunshine of the Spotless Mind. Currently, he stars opposite Emma Roberts in the big screen adaptation of Nancy Drew.

Other familiar faces within the cast of License to Wed are Christine Taylor (Dodgeball: A True Underdog Story), Mindy Kaling (“The Office”) and Eric Christian Olsen (The Last Kiss).

But in the end, it’s Moore and Krasinski that make License the must-see date flick of the summer. Not since Robert Redford and Jane Fonda (Barefoot in the Park) has a duo of young actors played so well opposite each other in such roles. It can be surmised that these stars have been primed for this vehicle since day one.

Krasinski is a throwback to the days of leading men that oozed Any Town, U.S.A. charisma. Even License director Ken Kwapis likens his star to film greats like Jimmy Stewart and Gary Cooper. With praise like that, it’s no wonder this 27-year old is on the shortlist to play opposite some of the best talent in town.

Ever since his hilarious and heartfelt work as Jim on NBC’s “The Office,” Krasinski has garnered recognition not only as the straight guy, but as the one to seal the deal by bringing the jokes home. Each week, viewers of the show delight in his mischievous reactions to the unique personalities of his coworkers.

That, coupled with a slew of rabid fans who take to the Internet in droves with each new development of Jim’s burgeoning romance with Pam (Jenna Fisher) means that people are watching this guy, and more important, they like what they see.

Moore burst onto the celebrity scene as the lesser-known and ultimately scandal-free ’90s teen pop princess. But her multitude of gifts and talents extend much farther than her pretty face and clean-cut public image. She is a skilled recording artist whose debut album, So Real, was certified platinum within three months of its release.

Her second effort, I Wanna Be With You was released in May of 2000 and went gold. It was later followed by two other releases: the self-titled Mandy Moore (2001) and Coverage (2003). True, these were terrific feats for any artist, but for Moore, her music netted her comparisons to old school songstress goody-two-shoes like Marie Osmond and Pia Zadora.

However, mention her name around any celeb-savvy male between the ages of 18 and 25, and most of them will offer the same reaction: “Dude, she’s hot!” She stands out as a true Betty in a world brimming with Veronicas. Moore even capitalized on her image in 2005 with a nearly season-long arc on HBO’s hit comedy “Entourage.”

Playing a fictionalized version of herself, she sweetly melted the bachelor resolve of Vincent Chase (Adrian Grenier), almost ending his star-making performance in a blockbuster summer action flick. It’s cred like this – acceptance from the cooler kids – that is slowly but surely allowing this starlet to shed her bubblegum pop skin in favor of something sleeker and sexier.

In License, Moore has physically come into her own providing a deeply feminine presence when in scenes with co-stars like Krasinski and Olsen. That playful dichotomy spills over into real life.

Krasinski comments about Moore, “I was so impressed by the way she carried herself.” The singer-actress returns the compliments about the men in the film. “I think I enjoyed witnessing John and Robin sort of play off each other,” she says. “I was always the first one to break.”

And it’s no wonder. Krasinski has shown that he’s a funny man onscreen and off. His amusing public declarations of love for the Dunkin’ Donuts franchise on “Late Night with Conan O’Brien” (where he once worked as an intern) and Williams’ side-splitting tangents on, well, just about anything, make Moore a true professional for daring to step into the ring with her cast mates.

She especially holds her own (despite a brief giggle) during an interview for the film, when Williams storms into the press room as she’s speaking. Affecting a feminine tone of voice, he jokes about Moore’s bright, Pucci-patterned outfit, saying, “I just wanted to say I picked out that dress!”

Then to cap off his impromptu rendering of a flamboyant Hollywood stylist, he snaps his fingers, rolls his neck, puts his hand on his hip and slips back out the door.

Interviews
'Crazy Rich Asians' made Henry Golding a star. Now he's showing Hollywood everything he can do
793 views