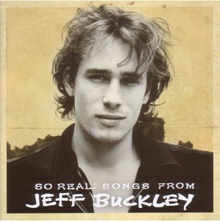 There is really no middle ground when it comes to appreciating the music of Jeff Buckley – either you barely know him from hearing one song or you are a devoted fan of every note. So Real is a compilation of the “best” of the late singer’s work compiled from all of his previous releases, and is meant to delight old fans and bring some new ones into the fold.

Buckley’s music has an easy melancholia about it; songs like “Grace,” “Lover, You Should Have Come Over” and “Forget Her” are perfect examples of how he could make depression and loss seem tolerable. Maybe that wasn’t the case for Buckley in reality, as there is still some question whether his death by drowning in 1997 was an accident or suicide.

Either way, the fact that this very talented man was lost at such a young age (30) makes every emotion here all the more potent. A couple of previously unheard tracks are included; a live acoustic version of “So Real” recorded in Japan and a live take on the Smiths’ “I Know It’s Over.”

So Real: Songs from Jeff Buckley is currently available.