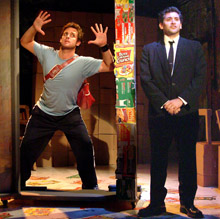 We’ve all heard the phrase “Boomerang Kid.” It haunts college students, an unseen specter that burrows its way into one’s psyche, that idea that you might actually have to GO HOME.

But no matter how much we fight it, we’re a part of the Boomerang Generation, college students destined to return to the loving confines of the golden cage that our parents have so lovingly prepared for us.

Chris Econn tackles the concept of the Boomerang Kid in his larger than life production at the Powerhouse Theatre.

The main character, played by Tyler Poelle, is a college grad with more balls than brains, a personality quirk that leads him back home to get a fresh start. He has a loving mother who is just as ready to throw him out the door as he is to exit it, and a shrink who seems fairly positive that his only hope for redemption and success is to take a rather mysterious drug called TKTK9.

I would love to tell you what this play was about, but only you can decide the direction that the characters move in this vaguely twisted account of life at home. That’s because Econn modeled his production after the Choose-Your-Own-Adventure books of yore.

You remember those: turn to page 52 and then pretend you didn’t when it turns out your character dies of an asp bite.

As each audience member enters the theater, they are equipped with a PDA and a pencil. At certain points in the story, you’re expected to dial in your plot choices, thereby guiding “You” either for good or for evil. For some reason, “You” seems to make bad choices anyway, but that’s OK – it keeps the play lively and entertaining.

“You” can make the decision to join the corporate ladder and deal with your repressed-homosexual boss, or you can run off to the jungle with your uncle and take on smugglers and drug lords. All depends on how you roll the dice.

Love interests abound for those who get a kick out of romantic drama. “You” seems to be lucky in love and inexplicably magnetic to really weird chicks.

In the version of the play I saw, “You” ends up with crazy psychiatrist No. 2 who encourages you to delve into your deep inner pain with a less than orthodox reward system. “You” seems to take to this form of psychoanalysis.

All the while, “You” are shadowed by your inner narrator, perhaps my favorite character in the entire show, played by Andrew Koenig. Yeah, every once in a while he slips on a line, but he plays the smug narrator to perfection, and his interactions with the characters in the play universally result in hilarity.

I greatly respect the actors that took on this project, because there are 50 possible ways that the play can turn, and each actor has to be prepared for every one. This means that there are 250 pages that every actor slaved to rehearse and memorize that they may never totally use.

I only really took issue with a few things in the play. I loved the main character and the subject matter, but many of the characters were 2D stereotypes, either of bitter computer programmers or flaming “metrosexuals.” And while the plots usually managed to hang just on the edge of believability, there were times when they just nose-dived off the “trying too hard” precipice.