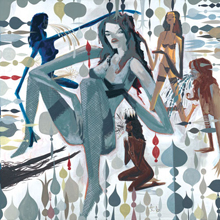 Whether it’s a sense of humor or a piece of canvas, rarely would anyone take pride in being labeled “lowbrow.” Billy Shire Fine Arts in Culver City, however, takes lowbrow to new heights.

In fact, Juxtapoz magazine dubbed Shire, “the Peggy Guggenheim of lowbrow.” The gallery gives artists with an uncommon eye or sensibility a place to display their dreamlike goblins and framed twisted tales.

Shire opened the La Luz de Jesus gallery in 1986 on Melrose Avenue. He saw the gallery as a place for a new breed of art to be displayed. The artists who graced the walls of La Luz de Jesus had a style that was more unusual than modern art with a heavy-handed pop culture influence.

The La Luz de Jesus gallery is still around in a new location on Hollywood Boulevard inside the Soap Plant/Wacko store. Shire wanted to bring this new counterculture style of art to the masses – and the masses responded. The gallery became such a hit and garnered such demand for its dramatic works that he opened the fine art gallery in Culver City to accommodate his new clientele. Popular artists who have decked Shire’s walls include Glenn Barr, Gary Baseman, Elizabeth McGrath and Tim Biskup.

The gallery is currently showing a new exhibit for Biskup entitled Ether. The show features paintings, prints and objects of Biskup’s signature style including weeping girls, skulls and monsters.

Biskup’s style shows the influence of his adoration for animation and comics with a punk rock twist. He began his career creating designs for skateboard companies and record labels. His cartoon-like style led him to animate a short for Nickelodeon called “Freddy Seymore’s Amazing Life.”

“Biskup’s painting and works on paper are exceptionally well crafted,” Kim Bell of Artweek raves. “Each piece gives the impression of both a conscious eye for detail as well as unchecked enthusiasm.”