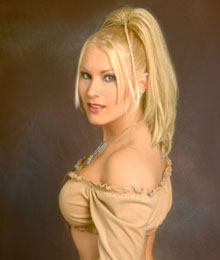 They crash cars, catch fire, ride bikes, fall from buildings and double for some of the most beautiful women in the movies: Welcome to the world of Hollywood stuntwomen.

“Doing stunts isn’t glamorous, and it isn’t easy,” explains stuntwoman Gloria O’Brien Fontenot. “All I want is to always strive to be just a little better, just a little smarter and just a little more prepared. That’s where I really get the satisfaction. What we do is a calculated risk. We don’t just go hurl ourselves out into danger.”

Meet the woman who doubled for Bryce Dallas Howard in the blockbuster Spider-Man 3 and who has done motorbike stunt work for Jessica Biel and Drew Barrymore.

In addition to Fontenot’s work in Blade III and Charlie’s Angels: Full Throttle, she has also worked on Constantine, The Italian Job, Spider-Man 2, “Buffy the Vampire Slayer” and Scream 3, doubling for Jenny McCarthy, Maria Bello and even Gwen Stefani in the No Doubt’s “Ex-Girlfriend” video along the way.

One of the founding members of the V10 Women Stunt Professionals and a member of Frogmen Unlimited, a stunt and diving group, Fontenot currently calls Riverside home.

“I was born and raised in the suburbs of L.A. It’s all I’ve ever known. I started show business when I was 6 and did my first commercial. I had all the training and lessons at music, dance (seven years of ballet) and competed gymnastics. Stunts is kinda the ‘hybrid’ of being raised in the business, but really having my passion in sports.”

Fontenot’s uncle was Cubby O’Brien, an original “Mouseketeer,” and is now a drummer on Broadway. Both her grandfathers were also professional musicians, and Fontenot has two children, Michael and Megan, who have already acted in movies.

“My family has been really supportive. I was actually surprised, in the beginning, that they were so supportive of me in this choice,” she remarks. “I thought they’d be completely against it, but they know how much I love it, and they know how happy it makes me to succeed at something I’m so passionate about. My mom worries about it most, I think.”

Being a mother and working in dangerous career can be doubly difficult for women because their colleagues are usually exclusively male. But Fontenot has found a way to combat any jealously or sexism.

She says, “One of the worst things to do is complain about it. The best thing to do is to train and be the best you can be, be nice about it, and it generally melts away. If you can’t do it yourself, then you shouldn’t complain if they say that there isn’t a woman who can do it! On set though, people are usually curious about what we do, and what kind of people we are that would do this for a living.”

Fontenot, who is currently single, does admit that it can make for an interesting conversation when it comes to dating.

“I do find that it can be hard to find men who aren’t threatened by what I do and my lifestyle, who won’t at some point in time either have a hard time with certain stunts, be possessive or jealous about the time I spend at work.”

With over 100 films, television shows and commercials under her belt and a recently released CD, Fantasy, out now, she’s delighted to see that more women are entering the industry through her efforts with V10.

“It’s great that there is a huge influx of new stuntwomen every year. Only a few of them end up making a career out of it, but it makes for an extremely competitive business. I’m very serious about my career and what I want to accomplish professionally and personally. You have to have consistent focus, mental preparedness and a commitment to reaching your goals,” she says.

These thrill-seeking goals, no matter how incredibly dangerous, are what keep her coming back for more, as she did in last year’s big budget remake of The Poseidon Adventure.

“I also got hit by a car for the television series, ‘Criminal Minds,’” she brags. “And I flipped over the front of a bike for a movie called Her Best Move. I love stuff like that. I’ve really had fun lately!”