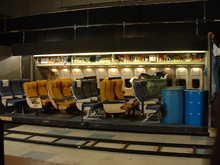 Where exactly do directors and production companies go if they need to film their lead actors in a 747, Air Force One, or Learjet? The answer can be found behind the doors of an anonymous warehouse in North Hollywood, where you’re greeted by the nose and cockpit from the classic movie spoof Airplane! when you come through the gates.

For nearly 20 years, airplane interiors for some of the biggest movies and TV shows including Thank You for Smoking, Charlie’s Angels, Face/Off, Fight Club, “The West Wing” and “The Sopranos,” have been assembled, customized and shipped by Aero Mock-ups to filming locations across the country.

Originally from the UK, founder and CEO Richard Chan first came to America to make up his flying hours to qualify for his pilot’s license.

“I was always fascinated by aviation,” he says. “I was born in Edgeware, north of London, and our house was right under the flight path of Elstree Aerodrome. I got my pilot’s license from there, but after my second visit to America I never really went back again.”

“I acquired a 20-foot cabin section that was a former display item. My first instinct was to tear it apart and sell the panels, but my then-secretary told me to hold on a moment. She used to be a script supervisor at a studio, and within a couple of months through her contacts we had our first show – and it’s been like that ever since.”

He originally started working in aircraft salvage and accident investigation, but soon found buying and selling aircraft parts was becoming too complicated. He was also lucky enough to acquire two planes from what was known as the “747 stage” at Universal Studios, including the aforementioned Airplane! cockpit.

Walking into the warehouse is an odd feeling; rows and rows of different airline seats hang from the ceiling, segments of airplane interiors everywhere you look. There is also a whole wall of airport signs, a row of airplane toilets, including one that has been built larger than airline specifications for “Mile High” scenes, check-in desks, security gates and a whole corner of set dressing props.

Chan’s especially proud of his newest interior, the Boeing 787: “It’s so new they don’t even have training mock-ups of it yet, or even a training simulator for the pilots. We were fortunate enough to acquire the actual set that was demonstrated to the Board of Directors at Boeing, and once they signed off on it they didn’t need the set anymore.”

Unsurprisingly, Chan wouldn’t reveal where he gets his planes.

“It comes from a lifetime in the industry and traveling the world selling aircraft parts. I talk to my old colleagues who may give me an idea of what’s coming up, and I can call over the world if I need to. I’ll just see the interior of an aircraft and buy it all, down to every last fixture and fitting. We usually buy the interiors from defunct airlines, such as Canadian Air.”

After passing racks of pilot and stewardess uniforms, two seats from the now-defunct Concorde and some of the cubed blue galley trolleys, I sit down in an airplane seat, of course, in Chan’s office and ask about his biggest project, the blockbuster disaster movie The Day After Tomorrow.

“Despite the airplane scenes only being very brief, we shipped four or five trailers all the way to Quebec. That was a huge show for us.”

As for the future, Chan has some big plans.

“We do over 100 shows a year, but if anything, this warehouse will be converted into an airport set. As for the day-to-day, well, any glamour is really just a by-product of the job, but I must admit that I’m looking forward to bringing my granddaughter in soon. We’re making a set for a movie with a monkey, and she wants to feed him a banana!”