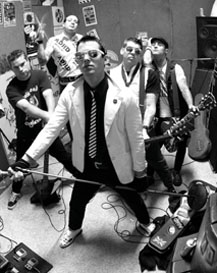 Drummer and founding member Rick Randow was in back, flailing his arms around with drumsticks in hand, pounding out meaty rhythms in the most precise fashion. Bassist Eli Miller and rhythm guitarist Phil Naked were to his right, strumming and picking furiously around in their own circles while Mimmo, the lead guitarist, kept ripping stellar solos at stage left.

Then I took a step back, unsure of what unpredictable escapade singer Mikey Backstage would do next. Sure enough, he became some kind of reincarnated version of Elvis with his own case of A.D.H.D. Only this time, he was wearing white leather shoes, not blue suede. He swung his mike stand more than his hips, and instead of pioneering rock ’n’ roll, he was breeding it with the attitude of punk.

I watched as each particle, each member of the band, buzzed around in their own separate worlds, bouncing and feeding off one another. Collectively, they consumed the stage and spit out all that energy to a grateful audience, causing even a security guard to mosh.

Those cheesy educational films could never do justice to kinetic energy like A.D.H.D. did at every available opportunity. It’s a special kind of chemistry that they can barely grasp themselves.

"We’re in our own worlds but we’re conscious of what the others are doing,"

explains Randow. "I could close my eyes and just know what everybody is doing."

Even as Backstage jumped on top of the bar counter and danced after guzzling a black and tan, he did it seamlessly, sporting retro, red-framed ’80s glasses. After observing A.D.H.D.’s antics for a while, it’s natural to wonder whether it’s just an act for them. But Backstage assures the contrary.

"As for our whole persona on stage, to me, it’s important to say that it’s real. I may not be dancing all crazy at everybody on the street, but for the most part, that’s how we live. We feel it because it’s in us and it just comes out."

Their edgy yet playful music evolves naturally as well. Brutally honest songs like "Bite the Bear" meet upbeat anthems like "Get Beat," providing accessible tunes minus all the politics that many other bands often get wrapped up in.

"I try to keep politics out of the lyrics directly," Backstage comments. "We’re not trying to give a political message. Our message is, ‘Shake your ass.’

Politics don’t necessarily make people want to shake their asses all the time."

What started as a couple of high school kids jamming has now become the most impressive new band to sprout from the San Gabriel Valley. Signing to a record label and taking over the world is the ideal goal, but A.D.H.D.’s drive to "have a good time" is still top priority.

"I want to go on as long as I can until it stops being fun," says Randow. Judging from their music and seeing them perform live, it seems possible that the fun may never end.