The Dear and Departed: Not Leaving Anytime Soon 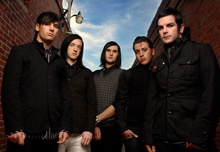 They’re snarky, sarcastic and if you have all of them together in the same room at once, it’s only a matter of time before you’re totally out of the loop of conversation in the wake of inside jokes and unspoken jabs. If these were five guys you randomly met on the street, there’s a good chance you wouldn’t like them very much at all. I can name at least one journalist in the room who kind of didn’t.

If the Dear and Departed’s album was one you randomly popped in your CD player for the first time, however, there’s a better chance you’d find yourself totally enraptured by the band and its music. Having garnered acclaim from their musical peers and infiltrated a broad range of genres to earn a respectable following, these foreigners – currently based in Orange County – just might have the rights to be a little cocky. And like most things that draw on a distinctively English sense of “humour,” given a chance, their personalities will grow on you in a very fungal-like fashion as well.

Citing the Cure and the Smiths as just a few of their varied influences, the band members are reluctant to compare their music to any of their contemporaries.

“There are definitely a lot of bands that aren’t around that we take influence from, and there are definitely a few that are around that we take from, but I can honestly say that what we’re doing is 100 percent us,” says vocalist Dan Under. “We’ve all been into music for a long time, and we all bring something different as far as influences go. We’re all not from this country, so I think that has something to do with our sound. Growing up in New Zealand and Australia, there’s a lot of English influence.”

Joined by guitarists Simon O’Gorman from New Zealand and Darren Parkinson from the U.K., drummer Joel Bourne from Australia and bassist David Williams, also from the U.K., Under and his band mates come from backgrounds as varied as their musical tastes.

“Each one of us has a unique story of how we came to America, and a lot of that comes through,” says Under of his songwriting and lyrical inspiration. “It’s the things you go through in life, the experiences, the people you lose, the people you meet, the people you love that all contribute to what you’re going to write about. We’re just an honest bunch of dudes that don’t really know any other way than to just write the music that comes out.”

With his own views on the state of music, Under makes it clear that, if nothing else, his band’s music is anything but forced.

“We’re not trying to reinvent the wheel. If any band thinks they’re doing that in this day and age, they’re wrong. Everything’s been done, all you can really do is make something that’s honest and just have a good time,” he says.

Cynical as that may sound, see the band play live for all the proof needed to know there is nothing about them that’s formulaic or contrived, impeccably styled as they may be. As Under jokes, “We have a lot of energy, but it’s not like, a ‘hair whip, guitar spin’ kind of energy.” Forgoing any kind of flashy bravado or gimmicky tricks, Under and his band mates know how to command a stage with charisma and musicianship alone.

Having opened for the likes of AFI, the band’s stylized, yet bare minimum approach to performing has already won over many fans one would consider hard to crack.

“There’s really not much more you can ask for than touring with good friends and an amazing band, and we got to do that with AFI on what was basically our first tour as this band,” says Under of the makeshift litmus test for how they’d be received as a band. “Every show was amazing, and for their fans to welcome us with open arms the way they have is really flattering and really cool.”

Maybe if the AFI fans can welcome the Dear and Departed into their venues and iPods, so can the rest of us, including the aforementioned skeptical writer.

“Honestly, I’d like listeners to relate our music to something that’s happened in their life,” says Under of what he hopes listeners will get out of his band’s music. “Every band that’s made me feel something had no idea I would relate their music to something personal to me, and that’s the great thing about music – that you can write a song and people can really take anything from it.”

The Dear and Departed’s Something Quite Peculiar is currently available. The band will perform on Warped Tour June 29 in Pomona & June 30 in Ventura. For more information, visit www.thedearanddeparted.com.