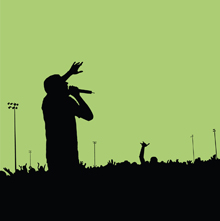 It’s summertime now and sweat, sunscreen, cheap beer and bus exhaust are in the air. I’m stoked to say that I’m going to be embarking on one of the great American pastimes for the extent of my Summer: the road trip. Of course, this isn’t your average road trip, because no one but my mom would care to read this if it was. No, my trip is going to be on the one and only punk rock Summer camp.

I’ll be Campus Circle’s foreign correspondent, so to speak, for the extent of Warped and bring you readers a behind the scenes look at everyday life on the tour and the stories of the batshit crazy musicians who are willing to do it every year. With long days of work in dirt, heat and humidity, only to pack up and head out in a van to do it again the next day, it takes a special breed of person to brave the Summer festival touring elements. Hopefully, I can bring light to what they do and why they do it, and show them for the people they really are, because being in a band is a whole lot more than the glamorous rock and roll party life MTV would have you believe it is.

It’s been a while since I’ve been on the road last, and I’ve never tackled anything on quite as big of a scale as Warped, so here’s hoping I can do these folks proper justice. Hopefully, I can achieve that without rotting my liver, getting left in the desert or bottling Cute Is What We Aim For front man Shaant Hacikyan in the face a la Brendon Urie (YouTube that up if you’re unfamiliar, it’s worth the price of admission).

I have absolutely no idea what I’m getting myself into for the next two months, and I’m sure I’ll get more than expected of everything, but that’s what makes for a good story, right? It’s the “Almost Famous” opportunity every aspiring music journalist dreams of, now it’s just a matter of…making sure I have bands to tour with.

As with most things in the music industry, nothing is 100 percent confirmed until you’re actually there doing it, but I suppose half the fun of Warped is the ever present subject-to-change air.

I bet Cameron Crowe totally did not have to deal with this kind of stuff.