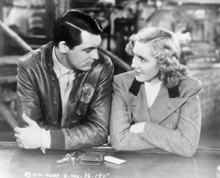 To the classic film buffs out there: this one’s for you.

The Egyptian Theatre, in a weekend of double features, is harkening back to the days when method acting superseded name value, and quality of the product wasn’t determined by quality of special effects.

Friday’s jungle boogie theme begins with Rampage, a film in which two men and their attractive female companion hunt down an elusive beast for the museum they work for. As the trio fights to survive, romantic entanglements create rifts in morale.

Then jump to India for Harry Black and the Tiger, a story of conquering one’s personal demons and finding love in the most unlikely of places … like the middle of the jungle.

Saturday starts off with The Train, a movie set on the other side of the World War II conflict. As the Allied forces close in on France, German art curator Oberst Von Waldhiem (Paul Scofield) works to get a collection out to Germany by train. With the French Resistance standing in his way, the artwork becomes a fight nobody anticipated.

The direction shifts from the front lines to behind them in a masterful spy thriller starring James Cagney and Karl Malden in 13 Rue Madeleine. Cagney plays a special agent hell-bent on drawing out the German spy who has infiltrated his ranks. When one of Cagney’s men dies, revenge comes into the equation.

Sunday is a high-flying double feature with Only Angels Have Wings and The Big Sky. Angels tells the tale of a daring airmail pilot and his casual relationship with death and not so casual relationship with a certain stranded showgirl, and The Big Sky delves into the American westward expansion and Kirk Douglas’ encounters with less-than-pleased Blackfoot Indians and one Blackfoot Indian princess.

The Egyptian Theatre is located at 6712 Hollywood Blvd. in Los Angeles. Admission is $10, $8 for students. For more information, call (323) 466-3456 or visit www.americancinematheque.com.