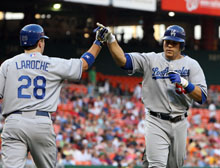 As of June 20, the Dodgers are 3-8 in Interleague play, with one game remaining at Toronto, followed by a three game set in Tampa.

Oddly enough, the Dodgers may actually have the talent to keep up with their American League counterparts, except for one thing. They seem to forget they are playing baseball whenever a runner is in scoring position.

After losing seven of nine Interleague games in Southern California, a few trends are noteworthy about the Dodgers this season:

In two games against the Blue Jays, he pitched 14.2 innings, gave up 11 hits, two earned runs, 12 strikeouts and one walk. The Dodgers are 13-2 when he starts, including six straight.

The sixth inning was indicative of the Dodgers’ woes, when they loaded the bases and with the heart of the order at bat. Luis Gonzalez fouled out to end the inning, stranding three runners.

For the Toronto series, the Dodgers were 4-for-25 with runners in scoring position, including 1-for-11 in the series opener, which was a 4-3 victory in 10 innings. That one hit was a walk-off pinch home run by Olmedo Saenz.

Speaking of Lowe, what a tough season for him. He has pitched at least seven innings in five of his last six outings (and six of his last eight).

Against Florida, Lowe took a shutout into the ninth inning, only to give up a three-run, walk-off home run (the Dodgers did not score that game). There was also the 1-0, complete-game loss versus Toronto.

Yet his record is a measly 7-6. If anyone has suffered from the lack of clutch hitting, it’s Lowe. In five of his six losses, the Dodgers were scoreless twice, scored one run twice, and scored two runs once (in Denver).

The Dodgers actually scored three runs in Lowe’s other loss. Had the Dodgers provided Lowe more run support, he may very well lead the league in wins.

Jason Schmidt has been a disappointment this season. He figured to anchor the rotation and challenge Penny for the top spot. However, on June 20, Schmidt was placed on the disabled list for the remainder of the season (season-ending surgery, right shoulder). Schmidt struggled this season – his record is 1-4, ERA is 6.31 and WHIP is 1.79. How the Dodgers fill that void will determine how they fair in the pennant race in a crowded NL-West, where it is shaping up to be a three-team race.

Despite their offensive woes, the Dodgers are 40-31 going into the final game at Rogers Centre, good enough for the fourth best record in the National League. Two of the teams ahead of them are in their own division, and the Blue Crew is only 1.5 games behind NL West-leading San Diego Padres.

The key to the Dodgers this season is pitching. Penny Derek Lowe are a combined 16-7 and carried the team.

Takahashi Saito has been stellar as the closer, with 19 saves in 20 opportunities. His only blown save was on June 9 against Toronto, after recording 23 straight.

Offensively, the Dodgers recently fired Hitting Coach Eddie Murray and replaced him with Bill Mueller. As if failing to advance runners in scoring position was not bad enough, two of the team’s most consistent hitters last season have not lived up to expectations this season: Rafael Furcal (batting .279) and Nomar Garciaparra (.282), combined for only two home runs this season. The Dodgers hope switching hitting instructors translates to more run support.

Accordingly, the Dodgers finish their road trip in Phoenix and return home to play San Diego and Atlanta. Lowe and Penny are probables in the San Diego series, with Lowe also a probable in Phoenix. This will give them three golden opportunities to gain ground on the two teams ahead of them.

Gonzalez and Russell Martin have led the team throughout most of the season and figure to continue to play key roles in the team’s success. Contributions from Furcal, Garciaparra and even Juan Pierre are all crucial if the Dodgers want to continue to be in the pennant race.

To win the pennant, they must: Advance runners in scoring position and provide run support for Lowe.

The Dodgers prove they have no problem getting on base. The biggest obstacle is getting them home. Arizona, San Diego and Atlanta all have solid pitchers, and the Dodgers better hope that their new hitting coach sparks a fire underneath the Dodgers’ offense to keep up with these teams. Otherwise, the Dodgers will have dug themselves a deep hole to climb out of in the second half of the season.

Not all Dodger bats are quiet. Two players stand out. Off-season acquisition Luis Gonzalez has been steady. As of June 20, he leads the Dodgers in batting average (.293), hit eight home runs, has 34 runs batted in and scored 35 runs.

The other significant Dodger is Russell Martin, a leading candidate to start as catcher in this year’s Mid-Season Classic in San Francisco. Batting .292 with eight home runs, he leads the team with 43 RBIs, scored 41 runs and has a career high 11 stolen bases. In only his second season, Martin is on pace to surpass his numbers from last season in almost every statistical category.

The Dodgers next home series starts June 29 vs. San Diego.