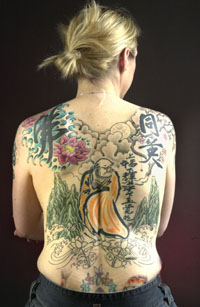 Getting a tattoo doesn’t exactly present itself with the same shock and awe value that it once did. It’s become so mainstream that everyone from the 18-year-old misfit to the straight-laced soccer mom is getting ink.

The growing presence of tattoos within popular culture is evident, inspiring television shows such as A&E’s “Inked” and TLC’s “Miami Ink.” Heck, you know something has gone mainstream when even Barbie is getting tattooed.

Those who attend tattoo conventions, however, might be just a tad bit more into it than your average folk. A delicate little butterfly or a tribal armband just doesn’t cut it for the hardcore enthusiasts.

The fourth annual Ink & Iron Festival, which took place aboard the legendary Queen Mary in Long Beach, June 8 to 10, was littered with those who take passion in collecting and adorning their body with tattoos.

For most of these people, it’s not just about having something cute to look at on your body. It’s about the art, and it’s about expressing your individuality on your sleeve.

Sure, there will always be trends in getting ink. Yes, it seems like every third person I know has a nautical star on their wrist. Mom tattoos will never die out. But seriously, enough with the Koi fish already.

The art of tattooing and being tattooed has become a culture within itself. Not the gang member/prison inmate culture (we are so beyond that stereotype), but the pin-up girl, biker, hot rod, music culture.

For those who enjoy everything that the tattoo culture signifies, Ink & Iron is for you. Those who stick out like a sore thumb walking down the street will blend in with like-minded individuals.

As one of the largest festivals of its kind, Ink & Iron features some of the best artists from around the world.

As the festival keeps getting bigger each year – last year’s event sold-out and greeted more than 15,000 people – it continues to be more that just a “tattoo” festival. Top of the line artists, performers and a variety of exhibitions have made it a place where there’s a little something for everyone.

You’ll find every style of artist you could possibly imagine, from traditional Japanese to the crazy and downright painful sulu’pre and the traditional Polynesian style, which is not done with the average tattoo gun, but instead with needles hammered in your skin with wooden sticks. Ouch!

Ink & Iron is a great place to get ink from the best of the best, and from someone who lives half way around the world, for that matter. And that’s just a slice of what the festival had to offer.

Up and coming musical talent and West Coast acts – the Briggs, U.S. Bombs and Reverend Horton Heat, to name a few – provided great escape from the sound of buzzing tattoo guns.

Inside the Queen Mary, the loud buzzing sound of tattoo guns at work was pretty much all that could be heard as three floors worth and thousands of people were getting tattooed throughout the weekend.

And as alcohol was allowed freely on the boat – always a plus in my book – it did cause for quite a congestion of people.

Outside however, there was plenty of room to breath and fun to be had. Under a big tent, there was a custom bike exhibit including performances by the renowned Vau de Vire Society, the Pin-Up Pageant and a variety of sideshow performers.

Even for the kid at heart, and for those with kids (yes, there were quite a lot of children in attendance, most of them covered head to toe with removable tattoos), there was a ferris wheel and bumper cars.