Talk to Me: Don Cheadle is Perfect as Petey Greene 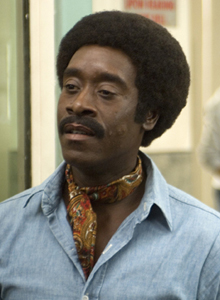 Whether he’s portraying a Rwandan hotel owner in Central Africa or the life of musical legend Sammy Davis Jr., Academy Award nominee Don Cheadle has done his fair share of playing biographical characters. In his latest offering, Talk to Me, Cheadle portrays the iconic disc jockey Ralph Waldo “Petey” Green, a controversial shock jock and community activist who achieved fame in Washington, D.C. in the ’60s.

An outlaw who was convicted for armed robbery in 1960, Petey spent several years in Virginia’s Lorton Prison (ironically the same place Martin Sheen, who is also in the movie, served three days for disturbing the peace). It was there that he honed his disc jockey skills. He would play records his grandmother sent him to fellow inmates and dish out his perceptions on the harsh realities of life.

An early parole in ’69 sent the ex-con back on the streets, where after co-founding several volunteer-driven efforts for ex-convicts, he ended up as a morning radio show host on WOL-AM radio, combining his caustic humor with social commentary.

Known for his outlandish humor, colorful wardrobe and efforts to help the disadvantaged, it was at the radio station that he forged a lifelong friendship with radio producer Dewey Hughes, played by Golden Globe Award® nominee Chiwetel Ejiofor (Kinky Boots).

Directed by Kasi Lemmons (Eve’s Bayou), Talk to Me profiles an exciting and turbulent period in American history. The story of Greene is well constructed as it depicts him neither as a heroic nor sympathetic character, but as one battling failings and achieving success.

“Cheadle embodies Petey,” says Taraji P. Henson, who stars as his fiery and flamboyant girlfriend Vernell Watson, a composite character created from a combination of many women in Greene’s life.

“The fact that Don was in the movie was the draw for me, and I fought even harder to be in this film because I knew he was in it,” she says. “He embodies every character that he portrays. He becomes that character and totally disappears.”

For Cheadle, who remained interested in the project through several years of development and serves as an executive producer on the film, it was a captivating story that had to be told.

“I was fascinated that this character really existed as I knew nothing about Petey before and first heard about him about 10 years ago when Ted Demme, who has since passed, had the project and was trying to get it made. Then it fell off the map, and Kasi was hired to do the write up on it, and it got resurrected again. She was really like a dog with a bone with it and really wouldn’t let it go until we pushed through to find a financer and get it made.”

Cheadle is perfect for the role of Greene, and although he has previously played biographical parts, he’s quick to point out that it doesn’t get any easier.

“It gets more difficult,” he counters. “It’s difficult because they are still relevant whether they are well-known or not. You try to capture the essence of whom this person is and try to be true to the spirit of their life and do a service to those who know him or did know him.

“This wasn’t really the Petey Greene story. It was more Dewey’s story and more about this friendship than it was about any one man.”

A seductive and engaging flick, Talk to Me follows the successful biopic formula in a genre (the ’60s) that Hollywood loves encapsulating with its colorful costumes, catchy phrases and foot-stomping soul music.

Talk to Me does a remarkable job of summarizing Greene’s strengths as a compelling spokesman for the black-pride philosophy and his weaknesses as a philandering womanizer and former drug addict. By the time he passed away due to cancer in 1984, he was so well-known and loved that more than 8,000 people lined up outside Union Wesley AME Zion Church on Michigan Avenue to pay tribute.

With a great cast, direction and a script that brilliantly weaves in historical events, Talk to Me moves along at a good pace without any slow points. Vibrant music and exploding social consciousness are superbly combined to create a unique and powerful effect.

Lemmons gets most of the periodic details right as she chronicles Greene’s release from the penitentiary to his much-deserved elevation to celebrity status as one of the all-time great personalities of that era.

“In seeking to direct Talk to Me,” Lemmons explains, “I wanted to make it an uplifting but funky and unconventional film which needed to be authentic to that period. Petey was a real person, and I wanted to stay true to the emotional authenticity of the characters.”

An absorbing portrait with rock-solid editing, this movie will tug and pull your emotional strings. Particularly poignant is the handling of civil rights leader Martin Luther King, Jr.’s assassination, which caused riots in the area at the time. Greene was credited for restoring the calm amongst the angry mobs in the killing that took America by storm during the turbulent ’60s.

A voyeuristic look into the lives of famous folks, good biopics illustrate for the rest of us that even famous people have human failings. Ultimately, the success of such a film boils down to acting, direction and writing, three categories Talk to Me gets tops marks in.

It’s captivating, appealing and enjoyable from start to finish; a biographical film that has the depth of fiction combined with an infectious soundtrack and raucous dialogue.

As biopics go, this has to be one of the best.

With yet another biopic about legendary jazz musician Miles Davis in store for Cheadle, two things are obvious: Hollywood and Cheadle have an insatiable appetite for the genre.