Rooney: Third Times a Charm for Calling the World 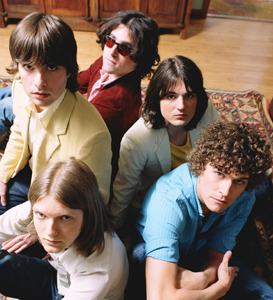 Imagine five teens from California pounding the pavement as a local band, catching the ear of a major label and selling a mighty 400,000 copies of their debut album, then touring the world with rock heavies Weezer and the Strokes. Sound like a rock star’s dream? This is the story of Rooney, whose 2002 self-titled debut surfed onto the scene like a tidal wave.

After a four year stretch, fans wondered what happened to the band that brought them the can’t-help-but-sing songs “Blueside” and “I’m Shakin’,” a band who was lovingly named after the infamous principal in the ’80s flick Ferris Bueller’s Day Off.

“We started making this record in the fall of 2004 and really had a vision for the album,” says singer-songwriter Robert Schwartzman. “We wanted it to sound like our live show.”

Ironically, the band found that the simulated live recordings in the studio lacked excitement, spontaneity and were way too over thought. He continues, “so then we made another record, but there just wasn’t anything special about it.”

After wrangling producer John Fields (Switchfoot, Andrew W.K.), the third time was a charm for Calling the World, the band’s latest release. Rooney recorded demos with Fields and ended up producing a completely different album, featuring songs filled with catchy choruses and harmonic melodies reminiscent of ELO, Queen, the Beach Boys and even those four famous lads from Liverpool.

“It’s important for us to have hooky melodies and memorable parts,” says Schwartzman about the three albums made with three different producers in the span of three years. “We didn’t really want to settle for anything less than that. With Calling the World, we finally hit on something that we thought was great.”

Adopting the California “bear” flag as part of the band’s emblem, it was only fitting that the video for its dance-inducing first single, “Where Did Your Heart Go Missing?” was filmed on the beaches and streets of Los Angeles.

“We cruise PCH [Pacific Coast Highway] to get to Malibu, go to a beach barbecue, then around sundown we get in our car and drive through Hollywood to go to a club called The Echo. We included a lot of our friends, fans and fellow musicians.”

Some of the same musicians at the video shoot also popped in at Rooney’s recent residency at The Roxy, sharing the mic with the likes of Susana Hoffs of the Bangles, Ben Lee, Phantom Planet and the Donnas and sang cover favorites such as “Under Pressure,” “California Girls” and the Bangles’ hit, “Walk Like an Egyptian.”

While making their debut album, the median age for the five comrades was 19, which also includes drummer Ned Brower and guitarist Taylor Locke on backup vocals, Louie Stevens on keyboards and Matthew Winter on bass. Now that the boys are young men, their lyrics have also matured.

“A lot of the songs on the first records were kind of made up stories of me,” confesses lyricist Schwartzman. “Like one was about asking a girl if she would marry me – that never happened. With this album, there’s more truth behind them.”

With “sex, drugs and rock ’n’ roll” nicely patched on every rock musician’s ass, the song “Are You Afraid?” was written about the insecurities of a relationship mixed with the stereotype.

“I was seeing somebody, and it was a long distance relationship. There was a lot of game playing going on, like not returning phone calls,” admits Schwartzman. “I was driving myself mad, losing sleep over what was happening. I guess the question was, ‘Are you afraid of the person that I am because I’m in a band?’ Honestly, we’ve all had a bad rap in our relationships because of the jobs we do.”

But don’t get them wrong, Rooney isn’t complaining. The band members are excited to be back on the road with a fresh perspective on how luck and talent collided for them to create nothing but good vibrations.

“People can take for granted the things they’re given and where they’re at. On the first album, touring and being young, we took things for granted. After struggling to make this second album, we’re appreciating every second out here on the road,” says Schwartzman with a smile. “It’s such a good feeling.”

Calling the World will be available July 17. Rooney will perform July 16 at The Roxy in West Hollywood and July 18 at the Wiltern in Los Angeles.. For more information, visit www.rooney-band.com.
Article posted on 7/3/2007
This article has been viewed 2304 times.