A Beautiful/Decay: Breaking Down Stereotypes in the Art World 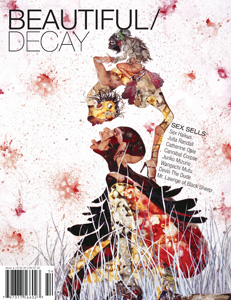 The “art world” is something widely believed to be unfathomable, a mysterious planet or universe in which the untrained and untested may not tread. The “art world” is where artists of any type congregate, where paint grows on bushes already in the tube, where two and two equals whatever’s convenient and critics are considered wild animals useful only for blood sports.

Here is where the artists colonize and are safe from the eyes and ears of the layman, that they may turn up their noses at our quaint ideas of “what looks good,” at least until they want us to buy a piece.

This is the image that most art media gives off, a sense of an elite corps, a mindset that can serve to exclude not only the public, but the artists who don’t see themselves fitting into the highbrow culture.

Beautiful/Decay to the rescue.

Beautiful/Decay is the art magazine that’s rooting for the underdog without bending to hotrod counterculture, the previous answer to the upper crust art world. It celebrates wall graffiti as having a place next to a painted canvas, death metal as appropriate listening material rather than classical. Essentially, it’s the art magazine for the people.

“Before this, there was nothing that bridged the gap between art design and pop culture,” says Amir Fallah, a UCLA art graduate and one of two original founders of Beautiful/Decay. “And because there was nothing like that going on, I figured I should start it myself.” Fallah and Jay Littleton, the other creator, started up Beautiful/Decay in its original incarnation in 1996 while they were still attending high school in the suburbs of Fairfax, Va. Bored out of their minds, they ran off to the city every weekend to find some way to spend their time. It was there that they discovered the 'zine world.

“We’d always see these guys making 'zines and giving them away, and I thought that was interesting so Jay and I started our own,” Fallah says. “It wasn’t a big deal, just a little hobby. I just forgot about it when I applied to college.”

And that might have been the end of it, just another good idea left half baked, but when Fallah began an exchange program in Baltimore, interning in various galleries and the like, he re-encountered that cultural divide. There was a magazine for the upper artsy class, a magazine for mainstream pop art, but nothing that was both accessible and of artistic integrity.

“A lot of the time I couldn’t find anything that covered my various interests,” Fallah says. “I didn’t think that I was their core demographic.” He solved that problem by making a magazine for which he was the core demographic, and others have followed.

Initially the magazine was completely self-funded. To get it off the ground, Fallah sold four or five of his own art pieces and used the proceeds to get the ball rolling. After that, he threw parties in warehouses to raise money for his little idea.

“I got a couple of advertisers, but I was pretty lucky most of the time just to break even,” Fallah says.

The magazine was re-launched in 2001 and since then has grown exponentially in popularity. It speaks not only to budding artists who wouldn’t mind seeing their own work displayed on big glossy pages, but also to others in the form of music articles and fashion.

Fallah and his team find the pieces they choose to display mainly through word of mouth and close connections with the few galleries that dare to show up-and-coming art. The Deitch Projects gallery, with which Fallah interned in his Baltimore days, is a big collaborator with Beautiful/Decay and has allowed Fallah to work with some of the artists that inspired him to start down this precarious pass so many years ago.

The message of Beautiful/Decay is simply that if it’s not there, it can be, and it’s up to you to make it happen.

“Just because there are five artists or designers or whatever that are the most popular and get press and are well known doesn’t mean that there aren’t artists on the brink of success or aren’t worthy,” Fallah says. “Publications go with the safest bet and we’re proof that that’s not the way things go.”

For more information, visit www.beautifuldecay.com.
Article posted on 7/5/2007
This article has been viewed 1270 times.