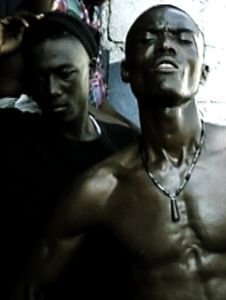 In the battle weary slums of Haiti, two brothers, of opposing political affiliations, vie for the love of one woman in the disconcerting documentary Ghosts of Cité Soleil. Filmmakers Asger Leth and Milos Loncarevic follow the brothers during the final days of President Jean-Bertrand Aristide’s iron rule in 2004.

When Aristide employed gang leaders known as chimeres, or ghosts, to silence his opponents, he gave power to the thugs living in the poorest sections of the island. Cité Soleil, a conglomeration of shantytowns outside Port Au Prince, was home to the roving gangs.

2Pac and Bily, brothers and aspiring rap artists, are foot soldiers in the illegal army. Tensions rise between the two brothers when 2Pac turns against Aristide and sides with the opposition. In a random twist of fate, Bily, a Lavalas loyalist, and 2Pac, an embittered ex-con jailed by the aforementioned president, fall for the same woman, Éleonore “Lele” Senlis.

Leth, Loncarevic and fellow cinematographer Frederik Jacobi literally dodge bullets in their quest to capture the desperate lives of the siblings. The filmmakers’ intention is to humanize the malicious murderers by showing their softer side, but the attempt fails.

In the months following the coup in 2004, the country was engulfed in violence between the interim government’s forces and Lavalas supporters. Many members of the Lavalas party were sent to jail, exiled or killed. 2Pac was killed, and Bily’s body went missing and has not yet been found.

Knowing the future of the brothers’ short lives casts a grim shadow on the film. They are now truly ghosts of the Cité Soleil, forever immortalized on film.

Ghosts of Cite Soleil releases in select theaters July 13.
Article posted on 7/5/2007
This article has been viewed 1528 times.