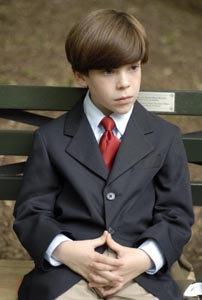 Dear Hollywood, enough of the creepy kid movies. Sure, you gave us great hits like The Ring and The Sixth Sense, but for every Samara that scares the pants off of us, we have to put up with five others that insult our intelligence as moviegoers and make us question the filmmakers lackluster scare tactics.

Exhibit A: Joshua. The movie denies both scares and thrills in exchange for a surprising amount of thick anxiety and dread.

The plot is simple. The Cairn family is doing just great. They just had their second child and their first, Joshua, is flourishing. Joshua’s actions, however, soon turn mildly strange and then graduate to moderately strange as we watch the effects this has on the rest of the family.

Joshua himself, played by Jacob Kogan, rates surprisingly low on the creepy-kid-o-meter. Granted, he does wear the obligatory suit and keep his hair nice and proper, taking notes from The Omen’s far superior Damien, yet a fine suit does not automatically turn a creepy child into a film’s antagonist. The issue with Joshua is that he just doesn’t look creepy enough to sustain any sort of suspense.

When anxiety attacks are free of charge courtesy of the 405 Freeway, I find no compelling reason to see Joshua outside of some admittedly fine directing.

Joshua releases in select theaters July 6.
Article posted on 7/5/2007
This article has been viewed 1548 times.