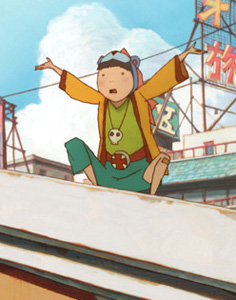 Based on the popular manga by Taiyo Matsumoto, Tekkonkinkreet is the first animated Japanese language film to be written and directed entirely by Americans.

The story is set in the fictional Treasure Town and follows two street children who go up against the Yakuza (the police), rival gangs and shady corporate suits to defend their city and stand by each other when the trials of life strain their relationship.

Combining digital effects and classical hand drawn animation, the quality of the animation is absolutely phenomenal. The design of the city evoked Akira, and the film’s few action sequences felt very influenced by the frenetic martial arts choreography of Ninja Scroll and Ghost in the Shell.

However, the design of the actual characters differed from the aforementioned films by combining the look of traditional Japanese anime characters with the look of American comic books.

Japanese animation stories and character motivations are at times very confusing, which is very true of this film. Diehard anime fans will love it, but non-anime fans that are looking for a simple, easy to follow film might want to watch Finding Nemo instead.

Tekkonkinkreet releases in select theaters July 13.
Article posted on 7/5/2007
This article has been viewed 1889 times.