Acute: Arms Around a Stranger 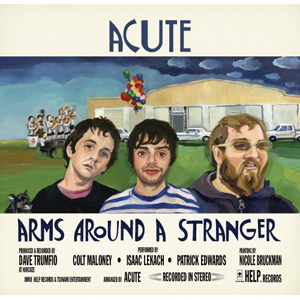 Originally, frontman Isaac Lekach performed under the moniker Poulain, enlisting other musicians to accompany him at performances. After meeting bassist Colt Maloney and drummer Patrick Edwards (of Ozma fame), the trio became Acute in early 2005.

Though a relatively young group, it seems these musicians had a vision of what direction they wanted to go in from day one and took it there. Blending frenzied guitars with upbeat melodies, there’s a little something for everyone on this CD.

As there should be, because Dave Trumfio, famed producer for Wilco and My Morning Jacket, was at the helm. With his help, the balance that prevents music from sounding like a bunch of noise with washed-out lyrics is carefully applied.

Lekach’s deep vocals can sometimes be a little haunting. Perhaps it’s the delivery. When Lekach sings, “someone I know is after me with hungry eyes and sharper teeth,” you might think this is a scary situation for the singer, but it’s actually Lekach that you should fear because “You Could End Up In Love.” Be sure to check out breakout single, “Follow You Home” on the radio, if you’re scared to take the plunge!

Arms Around a Stranger is currently available.
Article posted on 7/5/2007
This article has been viewed 1427 times.