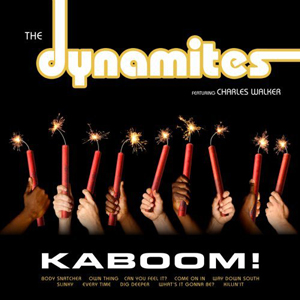 This big band is from Nashville, but the kind of music they play is more closely affiliated with another Tennessee city – Memphis. Guitarist Leo Black leads a musical tour that cares little for state lines; despite its title “Way Down South” echoes the California soul of War, “Body Snatcher” is an instrumental that recalls Tower of Power and “Every Time” grooves to an arrangement that is straight out of James Brown’s bag.

The band features two saxophone players and Jon-Paul Frappier on trumpet, a drummer and a percussionist, Jackson Eppley on bass and Tyrone Dickerson adding funky organ fills. Singer Charles Walker puts the “blues” into these R&B cuts, asking his woman to try a little harder on the gospel-tinged “Dig Deeper” and infusing humor into “Can You Feel It?”

“What’s it Gonna Be” and “Killin’ It” once again recall Brown, and it’s no wonder that the band references the Godfather of Soul so often – Walker has been on the scene for over 50 years, and he knows a good thing when he hears it. His long career has included many gigs at the famed Apollo Theater and the release of a slew of classy but mostly under-appreciated sides for the respected Decca and Chess labels.

This debut full-length from the Dynamites is the real deal. If you’re not marinating in sweat by the time it quits spinning you best have your ears checked.

Kaboom! is currently available.
Article posted on 7/5/2007
This article has been viewed 1281 times.