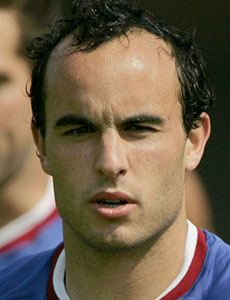 Major League Soccer’s Los Angeles Galaxy will begin a three game home stand on July 4 at the Home Depot Center in Carson against the Chicago Fire (with a fireworks show immediately after the game).

The Galaxy will host the Kansas City Wizards in an MLS game on July 7 and Tigres UANL in a 2007 World Series of Football game on July 17.

The three games lead up to the 2007 Sierra Mist MLS All-Star Game at Sporting Goods Park near Commerce City, Colo. The games also lead up to one of the most anticipated arrivals in L.A. sports since Wayne Gretzky was traded to the L.A. Kings in 1988.

International soccer superstar David Beckham is scheduled to join the team for its July 21 game against Chelsea FC in a World Series of Football game at the Home Depot Center. Beckham, 32, the captain of the English team and a star with Manchester United and Real Madrid was signed to a five-year, $250 million deal in January.

His presence and marketability as an international superstar both on and off the field is expected to do for soccer in Southern California what Gretzky did for hockey: bring in more fans and make soccer as big of a sport in the United States as it is in the rest of the world. Beckham is scheduled for play just one game for the Galaxy in July, but is expected to join the team full time in September.

The Galaxy could sure use Beckham’s help as the team limps to the Fourth of July with a 2-5-3 record. The Galaxy hasn’t played since a 3-2 home loss against the Columbus Crew on June 23 and has been off due the CONCACAF Gold Cup last week won by the U.S., who defeated Mexico 2-1 on June 24.

During the CONCACAF Gold Cup, Galaxy forward Landon Donovan scored four goals, including one in the final. Donovan has 34 goals in international competition for second place all-time on the U.S. National Team, tying him with Eric Wynalda.

Donovan has been nominated for a 2007 ESPY Award for the best MLS player. Donovan led the Galaxy with 12 goals and eight assists last season to earn the nomination, and currently leads the team this season with two goals and five assists.

Los Angeles Galaxy will play July 4 at the Home Depot Center in Carson. For more information, call (877) 3GALAXY or visit www.lagalaxy.com.
Article posted on 7/5/2007
This article has been viewed 1579 times.