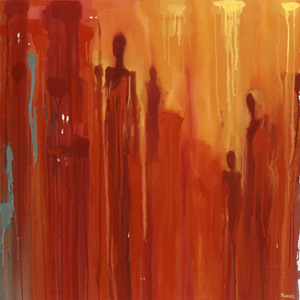 “It’s a colorful place, even if a society of artists still needs to have traffic wardens,” Irish born artist Gary Palmer says when I ask about life in Venice Beach. Originally traveling to Venice to street paint on the boardwalk, Palmer soon realized how unique the area is.

“It was a tribe composed of people from all over the world, most of them seeking the sense of community they missed as intrepid freedom seekers,” he adds.

I first discovered Palmer after hours of walking around Venice. I became entranced by an almost haunting painting, entitled Memories of Arusha. It was of faceless figures set against a beautifully streaked background.

I wandered from the hall into a smaller studio room, searching for more, only to discover this painting was merely one of a much larger series, entitled The Road to Zanzibar. Growing up in the ‘Troubles’ period of conflict in Northern Ireland in the 1970s inspired Palmer to find peace and conflict resolution through the arts. His deep concern about the political climate in the U.S. led Palmer to East Africa in search of compassion, color and beauty of different cultures. This theme has remained constant from his early work even through today.

Although, according to Palmer, The Road to Zanzibar might be his last word in figurative painting, it certainly was not his first. When I arrived home that night, I Googled Palmer’s name only to discover that I had seen his work before.

Palmer had released a book, Carpet of Dream, in 1996 documenting his earlier years as a street painter. I had come across this book through an e-mail chain years ago, mesmerized by the imaginative world brought to life on the city streets.

Palmer first started street painting during his time off from studying architecture at the University of Edinburgh. Palmer soon began traveling from city to city showcasing these works across the globe.

“It was a great way to travel,” he says. “I’d scope a town for the good pavement and enough pedestrian traffic, find a spot for painting and start to work.” Gradually people would gather; Palmer would make a little bit of money, some new friends and stay until it was time to hit the road.

Though it was the street painting that brought him to Venice in 2002, Palmer soon decided to set up his studio, The Distillery LA. He wanted to create a collective based on the concept of “distilling ideas to a simple interpretation.”

Palmer describes it as a “kind of anti-thesis to Warhol’s Factory.” He wanted to move away from contemporary pop art and into the direction of “more process, less stuff.”

Realizing this might be a romantic vision Palmer still refuses to give into any passing fad, even if those fads might have more gain monetarily. He found other artists in the area he feels are true in their disciplines as well, and together they press on, dedicated to continuously dig deeper into their crafts.

Since settling in Venice, Palmer and his cohorts have also created Mythmaker, a non-profit teaching program for children that integrates storytelling and visual art. Inspired from years of globetrotting, Palmer created Mythmaker to teach children about discovering different cultures.

In each session, children are encouraged to make a street painting or chalk drawing based on a mythological tale from across the world. From here the children can travel the universe without leaving their homes. Hoping to inspire understanding of different lifestyles in younger generations, the workshops are carried out both locally and internationally.

“It’s a simple idea,” notes Palmer, “but judging how much the kids get out of it, it could have a huge impact.”

As I went back to study the paintings of The Road to Zanzibar, I realized that these pieces were not haunting. They were peaceful. Palmer has traveled the world, studied different cultures and is continuously perfecting how to capture all he has learned with a paintbrush and a canvas.

In this particular series, he painted the simplicity of life that we, in the midst of a commerce-centered country, cannot always see. And if we cannot go to these places in person, thanks to Palmer, we can at least begin to understand them.

Gary Palmer’s work can be seen at www.garypalmerpaintings.com. The Distillery LA is located at 361 Vernon Ave., Studio 6 in Venice. For more information, call (310) 915-7037 or visit www.thedistilleryla.com.
Article posted on 7/5/2007
This article has been viewed 3210 times.