Greeks on the Black Sea: Ancient Art from the Hermitage
Now-Sept. 3 @ The Getty Villa 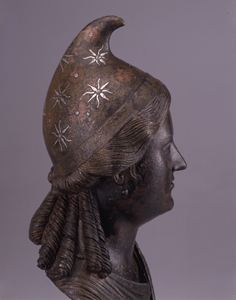 On Trivia Night on an Alaskan cruise, I lost Princess mugs and hats to a team from Cleveland because I mis-guessed the largest lake in the world. Yes, the Black Sea is a misnomer.

While the Greeks cruising the Black Sea probably didn’t have make-your-own-sundaes on their vessels, they carried something only slightly less expensive than a cruise ship Mai Tai and daily added gratuity: painted sarcophaguses, gold-inlay Lekythos (vessels from perfume) and equally opulent jewelry.

Greeks on the Black Sea: Ancient Art From the Hermitage (because, of course, any ancient Greek or Egyptian art has to be in either Russia or Britain) at the Getty Villa explores this influx of art as the Greek city-states created trade routes with indigenous tribes on the north shore of the Black Sea. Combining the tropes of Greek art with their own cultural heritage, these artisans crafted unique treasures, many on view in the U.S. for the first time.

Perfume doesn’t need a fancy vestibule – it is itself precious enough that funneling it into a Coke can would suffice. The Greeks on the Black Sea and my exes did not see it that way. Oil Jar Shaped as Aphrodite in a Shell, made in Athens sometime between 400-375 B.C. is a vessel as delicately mixed as the fragrance it held: a combination of terracotta, embarrassed blush pigment and dots of gold. These, along with the equally ostentatious sarcophagi, show that whether bones, scented oil or sailors, the Greeks knew how to pack.

(And, as I’m pretty sure they recycle questions on cruise Trivia Nights, if you ever win because of this information, please send one (1) mug or one (1) T-shirt to me, care of Campus Circle.)