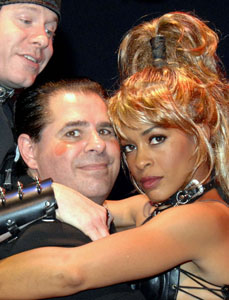 Gregg Coffin’s “Five Course Love,” a delicious musical comedy with a heaping portion of high camp, utilizes the talents of three actors to play a series of lovelorn characters using five different restaurants as a background.

The first scene presents country-western music resonating around a small table at Dean’s Old-Fashioned All-American Down-Home Bar-B-Que Texas Eats. The next is an operetta with a mobster and his two-timing moll in the Trattoria Pericolo.

The play continues all the way to the Star-Lite Diner, where poodle skirts and greasers pine for hidden love with ’50s music. The song “True Love at the Star-Lite Tonight” is reminiscent of “Grease” or “Little Shop of Horrors,” and could easily be plunked down into either Broadway production.

The set, designed by Dan Wheeler, is a clever use of the theater space. Even though it looks like St. Valentine regurgitated on the stage, it has a certain charm designed specifically for the show. A simple rolling banner and a few set pieces successfully changed the mood.

The actors are not only talented but are quick-change artists. Each dons five dissimilar costumes every time they appear on stage. Costume Designer Kim DeShazo should get credit for some of the best sight gags in the show.

When Jennifer Shelton saunters out as Gretchen in the cabaret, the audience guffawed. In tight, black leather and sporting a riding crop she was the very model of a sadomasochistic mistress.

Perry Lambert, channeling a Nathan Lane/Benny Hill hybrid, is hilarious as each of his characters, but he excels in the role of Heimlich, the cabaret-singing owner of the Der Schlupfwinkel Speiseplatz. Lambert’s enthusiasm and exuberance are contagious.

The show briskly speeds along, frenetic and fast-paced. Some of the punch lines can be seen from space, but they are delivered with such good-old-fashioned-golly-gee-let’s-put-on-a-play enthusiasm that it’s endearing instead of annoying.