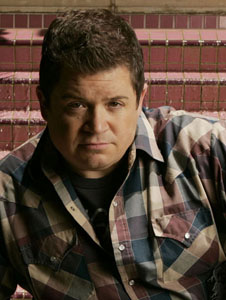 Patton Oswalt, of “King of Queens” fame, and Janeane Garofalo (the only one still insisting on Lisa Loeb-chic in 2007) performed recently as part of a multi-city press junket for Ratatouille (Oswalt voices lead rat Remy, while Garofalo is the voice of French chef Colette).

Though they played to double team us, and while an offstage friendship is easily explicable between the two (self-loathing cynicism loves company), they were pitching from different leagues.

Namely, Oswalt killed from start to finish, while Garofalo elicited screams – “We love you, Janeane!” – from lesbian clusters of a die-hard loyal fanbase while the rest of us tolerated her, a chuckle thrown in here and there for good measure.

Garofalo was up first, tattoos blazing on a seriously skinny figure. She was charming enough in her self-effacing, compulsively tangential neuroses, but she didn’t get a whole lot of laughs.

Other topics on hand were her eternal pursuit for Vicodin from her back doctor, her proclivity towards people who “at best, are ambivalent” about her and how shows like “CSI” and “Law & Order: Special Victims Unit” create science to justify their real content, pretty girls getting violently raped.

And then Garofalo visibly seethed in anger, at times tripping over her words in passionate contempt for the Bush administration. She managed to communicate that she could find no explanation for why anyone could still support Bush and his cronies.

Garofalo is your funny, smart, post-fem, post-punk cousin who moved to San Francisco and feels wholesome while gardening to NPR. She doesn’t kill, she doesn’t bomb; she just is.

Perhaps less widely known, Oswalt kept the crowd laughing from his first minute to his last.

Oswalt’s best jokes had to do with the recent birth of twins by a 67-year-old woman, KFC’s Famous Bowl – the best thing we Americans have got “until liquidized food is intravenously pumped into our arteries” – and what he would say to George Lucas about the Star Wars prequels.

If the Troubadour show’s any indication, Oswalt will be getting a lot of care-mail in upcoming years.
Article posted on 7/5/2007
This article has been viewed 1782 times.