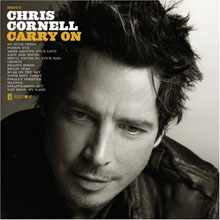 Growing up and getting a little mellower doesn’t have to be a bad thing, unless you’re the former lead singer of an iconic grunge band because then a conventional sound should never describe your tunes.

Former Soundgarden frontman Chris Cornell’s outstanding vocals should be able to sustain even mellow, mediocre songs, and on his latest, they almost do.

Carry On aims to rock at moments, and turns introspective in others. The payoff is just as uneven.

The majority of the album falls into the abyss of mediocrity. Songs like “Ghosts,” “Killing Birds” and “Your Soul Today” are nearly forgettable.

Perhaps the worst is Cornell’s attempt to cover Michael Jackson’s classic “Billie Jean.” The album ends on a high note with “You Know My Name,” a radio friendly, guitar-laden track that was the theme song for Casino Royale.

Even though it obviously lacks the grit and fire it deserves, Carry On as a whole is a perfectly listenable album, but nothing to, well, carry on about.

Carry On is currently available.