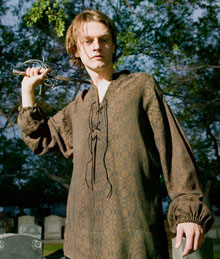 Shakespeare, like coffee, is an acquired taste. The poetic language, the complex philosophies and the broad comedic moments are subtly blended together for a rich theatrical experience.

The success of “Hamlet” remains squarely on the shoulders of the eponymous hero. Hamlet is a burdensome character for an actor to perform, with multiple soliloquies and a shifting emotional register.

A production succeeds or fails on the ability of its lead actor. Dean Chekvala is an apt Hamlet. He’s charming, likable and completely capable.

There’s an electric intensity when the prince argues with newly appointed King Claudius (deftly played by York Griffith). The two have a great chemistry.

The chemistry is almost as amazing as it is between the young lord and his lady, Ophelia (a luminous Sarah Utterback). Utterback’s superb performance nearly steals the show.

The production is slightly marred by Sean Sellars’s irksome portrayal of Polonius. Though the role is often played for laughs, Sellars’s overtly pronounced decrepitude in portraying the elderly chief advisor annoys more than it amuses.

Hollywood Forever is the ideal location for “Hamlet,” a show heavily permeated in death and all its mysteries. Angelenos unaccustomed to picnicking in the cemetery may squirm over the open grave being dug for Ophelia, but the macabre comedy of the Grave Digger (a hilarious Clark Harding) should assuage their apprehension.

There are a few petty annoyances of the production, but they rest squarely on the venue and not the actors. The pop of the wine cork, the occasional cell phone ring and the incessant crinkling of foil wrappers tarnish the show.

The acoustics at this open-air venue are not the best, and Los Angeles itself intrudes on the production; it is “Hamlet” under helicopters. Three noisy choppers encircle the cemetery at the premiere performance, temporarily drowning out the actors.

Without these trivial distractions, it would be easy to declare “Hamlet” a hit, a palpable hit.