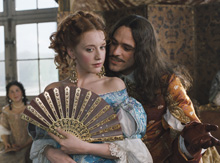 “What I like about period films is that [they] allow me to talk about today and things that I see today in a totally disguised way.”

These are the clever words of French filmmaker, Laurent Tirard. In his latest feature, Tirard tackles the road less traveled by creating an amusing “what if” scenario surrounding the lost years of 17th-century playwright and comedic actor, Jean-Baptiste Poquelin, also known as Molière.

Instead of doing the same old stuffy “Masterpiece Theatre” rendition of this historical figure, the director unleashes a flirtatious new millennium-friendly version of the famed artist. The result is a film about a relevant figure that’s accessible to today’s audiences.

“It was important to me that he’d be a sexy Molière,” says Tirard about his vision for the film. That’s not the easiest thing in the world to accomplish when constructing a story about a dead guy whose most important accomplishments took place over 400 years ago.

Other films have sought to humanize and de-stigmatize early literary figures with decent results (1998’s Shakespeare in Love was a critical and commercial success). However, very few people have dared to take on the complex intricacies of Molière – particularly during a time in this artist’s life when not much is known about him.

“There’s a film that’s already been done about Molière. It’s a four-hour film about his life from birth to death. I didn’t want to remake that film,” says Tirard. “In a way, I wanted to make the movie [that other filmmaker] didn’t make; the one about him and his plays. It was clear to me from the beginning that it would all be fantasy."

Romain Duris (L’Auberge Espagnole – a must see) is golden in the title role. He saunters and sashays across the screen with unbridled energy and charisma.

His performance of Molière is like seeing Prince perform for the first time, or watching Johnny Depp play Captain Jack Sparrow. Duris breathes a decidedly youthful air into his character.

“At first, I couldn’t find an actor that I thought was right for the role of Molière,” explains Tirard. “The only way to cast the film was to forget about the character and to cast the actor.”

As a fan of Duris, Tirard was eager to work with the young Frenchman. He felt that the actor would be a natural at stepping into this part and making something unique out of the opportunity. In the end, that decision proved a good one.

The rest of the cast is played beautifully by talent like Fabrice Luchini and the scorching hot Ludivine Sagnier (Swimming Pool). Each actor is a perfect fit for the comedic elements within the project. Not since the Kenneth Branagh period pieces of the early ’90s have the days of yore been this understandable. But that’s not a coincidence.

Tirard confesses, “I loved Much Ado About Nothing, and it was certainly something I thought about while making Molière.”

Other films that excite the 40-year-old director are the works of François Truffaut and Breathless by Jean-Luc Godard. Despite the fact that these are two of the most studied French filmmakers in history, Tirard admits that he was late to discover them.

He only became privy to their works while attending New York University. He also lists contemporary favorites like Woody Allen’s Annie Hall and Francis Ford Coppola’s Apocalypse Now as films that move him.

When asked what he feels differentiates the two factions: French Cinema vs. American, Tirard is equally astute.

“In America, film is considered a job. It’s a profession. It’s a craft. Later on, if you’re talented, you can go on from being a craftsman to an artist.

“In France, they feel that you get this divine gift. You are born an artist, and you don’t have to learn [a natural talent]. I personally think this is a lazy excuse.”

Down the road, audiences with an eye on the career of this bright auteur just may find talent like Cate Blanchett and George Clooney appearing in his projects.

“There’s something about George Clooney. [He] is a revival of actors like Cary Grant and Gary Cooper. I could watch him in anything.”

If the recent successes of French imports like Paris, Je T’Aime and La Vie en Rose are any indicator, then Tirard can expect a long and creatively fulfilling career ahead of him on American shores.

Interviews
James Bond producer: 007 ‘can be of any color’ but never a woman
1,621 views

Interviews
For Martin Scorsese, making ‘The Irishman’ was about ‘learning to die’
1,328 views

Interviews
Maleficent doubts her fitness as a mother. So did Angelina Jolie
918 views