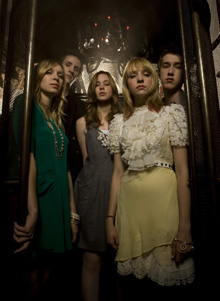 This town – which, up until now has been a blip on the radar – is home to Eisley, an indie pop group with undeniable talent. When the band enters the room at Warner Bros. during a press stop in Los Angeles, it’s so hard to imagine that its members, a quintet of stylish and hip-looking guys and girls, hail from this sleepy Texas suburb.

What’s even more fascinating is the fact that they are all related. Just like fellow Southern rockers, Kings of Leon, Eisley is comprised of four siblings and their cousin. But that’s the beauty of this group; despite its career successes (winning Best New Artist at the Dallas Observer Music Awards and touring with Hot Hot Heat), Eisley manages to stay incredibly grounded and, well ... human.

While their contemporaries stay in the tabloids for [insert pattern of bad behavior here], Stacy, Garron, Chauntelle, Weston and Sherri have easily kept the family values instilled in them, while maintaining a sharp creative edge. That staunch dedication to professionalism is due in large part to the fact that their father, Boyd DuPree, is the band’s tour manager.

Most burgeoning rock stars would balk at the notion of having a parent on the road with them while touring, but for Eisley, it was natural. The group formed in 1997 when most of the members were still children.

Good fortune soon followed when Warner Bros. signed them to a major label deal in 2003. Shortly thereafter, Eisley’s videos were being played on MTV’s “Subterranean,” and the band was performing at shows like Coachella.

Yet, there have been setbacks. Much like Spinal Tap, Eisley has had a revolving door of bassists (as opposed to drummers), but seems to have finally found the missing piece of the puzzle with the addition of cousin, Garron DuPree. He adds a cool, elusive nature and surprising amount of maturity, given the fact that he’s now the band’s youngest member.

Eisley’s latest CD, Combinations, truly displays the wealth of talent present within this family tree. Songs like “If You’re Wondering” and “Go Away” are airy and poetic.

But for fans who like to rock, Eisley hands out louder tracks like, “A Sight to Behold.” The muse behind this particular effort is the film Braveheart (the band actually scored it to the movie as it played in the background). However, don’t count on hearing too much of this one during concerts.

“The drums are just really weird on that song,” says Weston. The consensus within the group is that this is the least favorite of all the new material, due to its heavy percussive nature and technical difficulty.

Still Eisley is dedicated to the experimental nature of music making. When asked who each of the members would love to tour with, the answer across the board is “Björk!”

But they’re also open to collaborations of a different nature. Considering the popular tendency of artists to team up with performers of a different musical genre (think: Jay-Z and Linkin Park or Gwen Stefani and Akon), Eisley is surprisingly receptive to a little cross-pollination of its own.

“If Justin Timberlake called us to do backing vocals,” says Stacy, “I’d be all over that!” It’s no doubt that the band’s label would be happy to know that its members are also amenable to hearing its music pop up on the big screen.

“That’s always been a dream,” offers Sherri, but she’s quick to add that she would be disappointed to have Eisley’s music appear in a silly teen comedy.

These musicians, as a whole, are highly protective of their image and collective futures. Quick fame and fortune is the last thing Eisley aspires to. Instead, maintaining a sense of normalcy and comfort within the industry and in personal matters is the driving force among the group.

Chauntelle, the eldest member of the band (and also a recent newlywed) sums it up best: “I love to build relationships with our fans, but I also want to keep personal stuff to myself.”

Shyness aside, Eisley is unique, and its music is vastly original. Intense vocal harmonies coupled with solid instrumentals result in a sound that is sure to have commercial relevance while speaking to the hearts of music lovers.

Pending the projected success of Combinations, these gifted entertainers are standing on the precipice of distinction, while keeping their feet firmly planted on the strongest foundation there is – family.

Combinations will be available Aug. 14. Eisley will perform July 18 & 19 at the Greek Theatre in Los Angeles and July 27 at the Silent Movie Theatre in Hollywood. For more information, visit www.eisley.com.