Ninja Chick: Mollie Culligan introduces us to Ninja Speak and shares her close encounter with the nude kind. 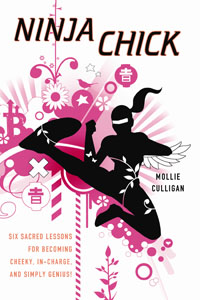 A ninja can be in a crowd of a 100 and understood only by her accomplice with the aid of “Ninja Speak,” like a secret language for warrior ears only.

Flaccid – a man who takes the run-of-the-mill “emotionally unavailable” to an award-winning status. The kind that picks up on a woman, sleeps with her but fails to mention his marriage, his mistress, his two children or his vasectomy. Ex: “She went all samurai on him when she found out he was yet another flaccid.”

Haiku – like the short poem that is its namesake, a haiku is a relationship that is shortly lived, never understood and sorta irritating. Ex: “Oh yes, Sean? Yes, some Haikus are better left forgotten. I pray daily for total amnesia of that entire episode.”

Planting – getting your friend physically close to the person she wants to talk to –usually takes place in a social setting. Ex: “She owes me big. I practically planted her on his lap. Then I chatted up his incredibly challenged friend so they could have some one on one.”

Sterile – An impeccably boring guy, a ninja most likely dates him because she wants her hair played with that week by someone inoffensive. Usually dropped in under a month, unless the sterile has “a Sumo.” Ex: “I just need a good sterile around while I’m in the last stretch of my deadline.”

Sumo – a man with very gifted proportions. Ex: We do hope you have plenty of your own examples to reference here.

Wasabi – hot and spicy man. Ex: “I don’t care if he does carry a man-purse, he’s totally wasabi!”

I once went on a hot springs retreat in Northern California for a friend’s wedding shower. On the way there one of the women mentioned that the last time they were at this particular resort there were “Potentials” on the premises – i.e. good-looking men. I commented, “Yarks, brought the wrong bikini, shoulda’ packed the cute one!”

Five women turned to me with curious stares. “Sweetie, no need for that, it’s a nude hot springs,” she explained. I pretended to be very cool, “Nude huh, like nude. Like, not even underwear, nude? So then, I’m down with that, ya know, I do it all the time.” Totally alone in the comfort of my own home.

Later as I peeled off the layers I made wild eyes at anyone nearby to ensure that no one would get any funny ideas and dare glance my way. There I was sitting around buck naked with a bunch of strangers on a wooden deck. After the initial inconvenience of awkwardly trying to strategize the placement of extra limbs to cover privates, and the occasional accidental glimpse at a saggin’ sack of boy-beans nearby, I found myself nicely “expanded.”

I was actually comfortable with something I never would have dreamt of doing before. In fact, half way through the retreat I became the ambassador for clothing optional, taking stark raving nudity beyond the pool deck … down to the nature hike ... around the campsite ... through the communal market ... because searching for the right tahini is always better cotton-free. I had never felt so liberated!

Though I was not entirely sure everyone else at the retreat appreciated my newfound glory as much as I did. Life as a ninja is all about dismantling, disarming, expanding. It is about taking the intuition you’ve honed and the confidence you’ve toned, all the work you’ve done and diving straight into your hot springs pool of life.

In eastern warrior culture the experience of life is called “life-death.” There is an acknowledgment that each day you are living, your body is also dying.

Each day you are nearing your own mysterious “best-by” date and as you tumble toward it you have a choice – to expand or to retract. Exercise your memory and stimulate all parts of your brain every day so there is no chance for atrophy.

Push the city limits of your spirit – your capacity for intimacy, the range of your experiences in life, your willingness to work through yet another argument with your friend, boyfriend, sister – because you might just learn something big. Always practice. Always expand.