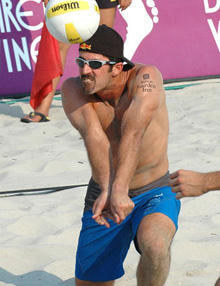 Long Beach is in the midst of its 2007 Sea Festival right now, a two-month series of family and athletic events designed to showcase the city as a premiere beach destination in Southern California.

Featuring more than 75 events, culminating on Aug. 30 with the last in the Twilight Concert in the Park series (Somerset Park, the 60’s Conspiracy; 6:30 p.m.), the big draw this year is the AVP Crocs Pro Beach Volleyball Tour, which marks the debut of AVP women and the return of the AVP men for the first time since 1985.

More than 150 of the top professional beach volleyball athletes in the world, including Olympic Gold medalists Kerri Walsh and Long Beach’s own Misty May-Treanor are competing in the tournament, which is being televised nationally on NBC. May-Treanor led Long Beach State to the National Championship with an undefeated record in 1998, earning her the NCAA Athlete of the Year award.

The AVP Tour resumed in New Jersey on July 5 after its two-week break, but there has been little movement in the Crocs Cup standings. The New Jersey Seaside Heights Open was the 10th event of the year, leaving six events remaining on the regular season schedule that concludes with the Cincinnati Open, Aug. 30.

The top men’s and women’s teams will be crowned Crocs Cup Champions and will win a Tiffany trophy with the award based on their best 14 finishes of the regular season.

May-Treanor and Walsh are holding onto the top spot on the women’s side with 3,150 points. On the men’s side, Todd Rogers and Phil Dalhausser hold onto their Crocs Cup lead with 3,258 points.

Besides the AVP, there are many more events to catch at the Sea Festival, including a grueling 54-mile water ski race to Catalina Island and back; a hugely popular sand castle-building contest; an extreme land-and-sea sports camp for people with disabilities; and world-class sailing events.

“Hosting this prestigious event in the third year of the ‘new’ Sea Festival is a huge positive for the entire community,” says Chris Pook, executive director of the Sea Festival. “The fact that it also comes with NBC Television is just the icing on the cake.”

The AVP Long Beach Open will be July 19-22. Tickets are $10-$40 and can be purchased at www.avp.com. For more information on the Sea Festival of Long Beach, visit www.seafestivallongbeach.com.